It’s late May, and a sunny bank holiday weekend is looming.  Because of the weather Lucy has epilated her legs and painted her toenails, so now she wants to put the pain and effort to good use.  She needs to find a date.

She decides to message Peter, the radio guy.  They’d met up just once and he’d seemed keen, but then vanished.  (You can read the full story here).

Lucy wonders if Peter can be resurrected.  So she drops a casual text.

Lucy knows she should be pleased, but is actually rather annoyed.  He seems to have no clue how pissed off she was about him vanishing last time.  No apology, no contrition, nothing.  How bloody presumptuous.  But still, it looks like she might have a date, which is, after all, what she wanted.  Those smooth pins won’t be wasted now.

So she hides her annoyance… at least as much as she can.

The promise of a snog is quite exciting.  And he was a good kisser.

So they meet, and it goes well.  There is sunshine, and prosecco, and kissing, and some good chat – though Lucy still thinks Peter reminds her of a pushy car salesman.  As the date goes on he gets pushier – or rather, filthier – whispering suggestive comments in her ear and letting his hands wander considerably further than is appropriate for a Sunday afternoon in the middle of Chiswick surrounded by yummy mummies and daddies and their toddlers.

But the smug marrieds and their spawn can sod right off.  Lucy’s enjoying it.  And although Peter leaves at 6 pm (he has to get up stupidly early for work), from his messages afterwards it seems he had quite a nice time too.

Lucy is really not sure what to make of all this.  It’s quite clear Peter is only after one thing.  Lucy feels she ought to be outraged and offended.   She’s a nice young lady (well she still feels young, even if 38 might not quite count) and she should be treated with respect.  At the very least he ought to pretend to try to charm her, and offer to buy her dinner first.

So before she can bottle it, she tells him she’s free the very next day. 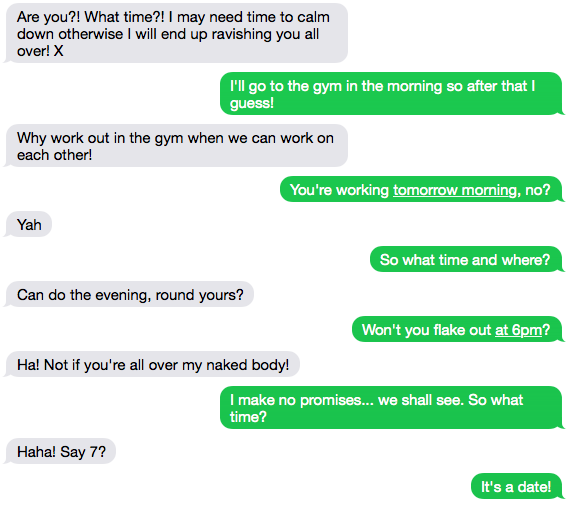 The next morning Lucy is super nervous.  She tidies and cleans the flat from top to bottom.   Does the same to herself.   Wonders if Peter will be expecting food.  Do you need to cook dinner for someone when they’ve invited themselves round for sex, she wonders.

Hates herself for being 38 and still not knowing this stuff.

Wonders if Peter will be gentleman enough to bring a bottle of wine.  If he shows up without one, that would be bad.  She’s not sure she should put out for a guy who would turn up at someone’s house without a bottle.  His next text suggests the odds are not in her favour.

By the time Peter turns up – in a flash white Porsche – she’s sunk the best part of a bottle of Prosecco to steady her nerves and is a bit tipsy.   Happily, he’s brought wine.  Thank fuck for that, thinks Lucy.  Now she’s psyched herself up for this she didn’t want to have to call it off.

Lucy is perplexed by the car.

Why did you drive?  she asks.  That means you won’t be able to drink.

She wonders if it’s because he wanted to be able to make a quick getaway if necessary.

Then she realises it might be because he’d been hoping to stay the night.  Tries to take her foot out of her mouth but it’s too late.