After what seemed like a never-ending dry spell which looked like it would only end when our heroine shrivelled up and died from lack of human contact, Lucy has finally had sex with Peter, who works in radio.

He texts her the next day.

But later she wonders if she should have paid attention to the number of exclamation marks.   Peter seems to have a tendency to overuse them when he’s being insincere.

Lucy is aware that guys don’t like to be chased.  As much as they protest that it’s the 21st century and they like the idea of equality, she has plenty of evidence that’s not true.  Guys like girls who are a challenge.  Lucy thinks she was a challenge when Peter wasn’t sure if he’d get to have sex with her.  But now he has, the attraction seems to be waning.

Lucy does try her best to be unavailable and hard to get.  She’s read all the advice that says that she should wait days before replying to messages, and be enigmatic and mysterious.  She knows what she’s supposed to do.  The problem is, she’s shit at it.  Lucy is prompt, efficient, and organised.  She doesn’t do failing to reply to messages.   And she’s a planner.  She likes to have her diary neatly organised in advance so she knows what she’s doing in the week ahead.  If she waits too long to reply to Peter’s messages, she won’t know whether they’re meeting up again or not.  And Lucy hates that.

The problem is, none of that is sexy.

But Lucy is 38.  She doesn’t give a fuck any more.  If a guy is going to be put off by her being herself, then so be it.  He wasn’t worth it anyway.  So she ignores the advice about playing hard to get and tries to pin him down.

Maybe one day she’ll learn.  But not today.

But of course he doesn’t.  So Lucy tells him she’s moving to Brighton.  Surely that will make her seem hard to get and have him eating out of her hand?  It seems to have the desired effect. 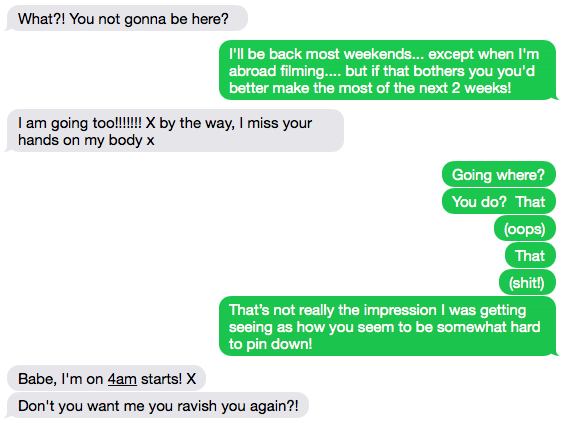 She definitely does, but she doesn’t want to give him the satisfaction of being too keen.  Not after he’s been so sporadic with his texts.  So she replies, but plays it cool.  Surely now he’ll come back with a suggested date?

But she should have noticed those seven exclamation marks – which more than ever seem to imply that what he really means is the exact opposite of what he’s just said.  Days pass, and there is no word.

Any sensible girl would have given up long ago.  Lucy knows she should do the same.  But she can’t. She starts making excuses.  Maybe he really is busy with work.  He does work long hours and have a stressful job.  And he did say she was ‘mind-blowing’ and that he wanted to ‘ravish’ her again.  Why would he say that if he didn’t mean it?  So she tries one last time to get some clarity.

Lucy has no fucking clue about men.

Well at least he replied.  But for fuck’s sake!  Why bother to write two texts making his excuses instead of answering the fucking question!

And there are those exclamation marks again…

Now he’s forcing her to wait for a WhatsApp message.  But why not just send a text?  Lucy just doesn’t get it, and annoyance boils up and spills over like the bubbles in a shaken can of coke.  She doesn’t even like the guy all that much.  Bloody car salesman.

And yet even so, part of her still hopes that when he does message, he’ll finally tell her when he’s free to meet up.  If ever there were proof that treating ’em mean keeps ’em keen, right now Lucy is it.

But when the message finally arrives, hours later, she is still none the wiser. 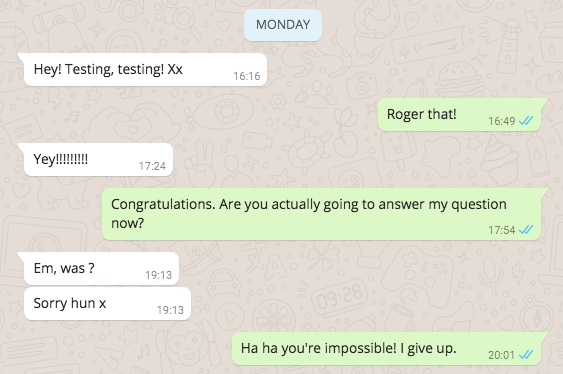 But Lucy’s fine with it.  She could never be with someone who misuses punctuation so appallingly.

(UPDATE: turns out it wasn’t all over.  To find out what happened next, click here)