Lucy discovers Peter on Bumble.  He has a great smile and an interesting job in radio.  Lucy is also happy to find that unlike at least half of the lazy fucks on the app, Peter has actually managed to find time in his busy and important life to write a few words about himself – and what’s more, they are all correctly spelled!

Clearly Peter is a cut above the rest.  Lucy wastes no time in arranging to meet him.

The would-be lovers meet on London’s posh Chiswick High Road on a mild Saturday afternoon in March.  Lucy arrives first at the pub – which is rammed with sports fans watching a rugby game.  Oh shit, she thinks.  This’d better not be a sports date.Peter calls. He’s running late.  Lucy is actually quite impressed that he’s bothered to phone rather than just text.  He’s chatty, and by the time he arrives the ice has been well and truly broken.  Peter is equally horrified by the rugby fans and suggests they go to a different pub.  Good work, Peter.

In the pub conversation flows, though Peter has the manner of a car salesman, with a slightly pushy confidence that seems a bit false.  Lucy imagines that when he smiles, she’ll see a sparkle flash from one of his very white teeth.  Still, he’s entertaining, so Lucy has more wine.

Peter seems quite taken with Lucy.  He repeatedly tells her she’s gorgeous, and midway through the date he announces that he can’t wait any longer to kiss her, and goes for it before she has a chance to react.  This has never happened before and she’s rather taken aback.  Where is the nervous walk to the tube station?  What about the bit when you can’t quite look the other person in the eye?  Surely you’re supposed to wait to say goodbye, so you can have that are-we-aren’t-we? moment where one goes for the cheek and the other goes for the lips?

Nope. None of that.  He just went for it.

Immediately there is embarrassment.  Lucy doesn’t know what to say.  Peter is mortified.  Lucy thinks that’s rather sweet.  So she invites him to try again, and this time it’s better, and less awkward.

Then Peter asks Lucy when he might get to have sex with her.

For the second time, Lucy is speechless and blushes furiously.  For a 38-year-old woman she really ought to be a hell of a lot better about talking about this stuff.  But around boys she fancies and boys who fancy her she still behaves like a teenager.

The rest of the date goes well.  There is copious kissing (very good) at the bus stop, and Peter asks when he can see her again.  Lucy decides he’s probably not Mr Right, but with a kissing technique like that, he can definitely be Mr Right Now. 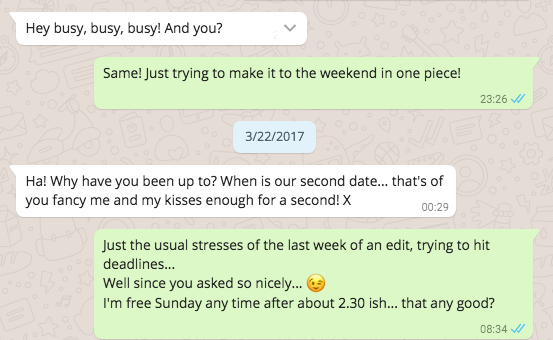 There is silence.  Lucy wonders if Peter was texting as he crossed the road and got knocked over by a bus.

The next day, she tries again.  She needs to know if she should send a condolence card to Peter’s mum.  It’s two days before Peter finally replies.  But at least he’s not dead.  Lucy is sure both he and his mum are pleased about that. 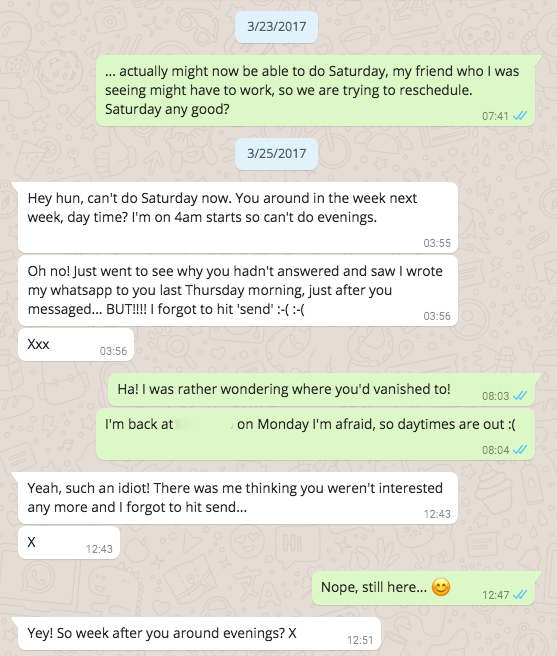 “Forgot to hit send”?  Lucy isn’t quite sure she believes this.  Especially since he made the same excuse twice.   Bit suspicious.

She’s also not at all convinced by a man who addresses her as ‘hun’.  But he DOES seem keen, so she gives him the benefit of the doubt.   She tries some of her best flirting. 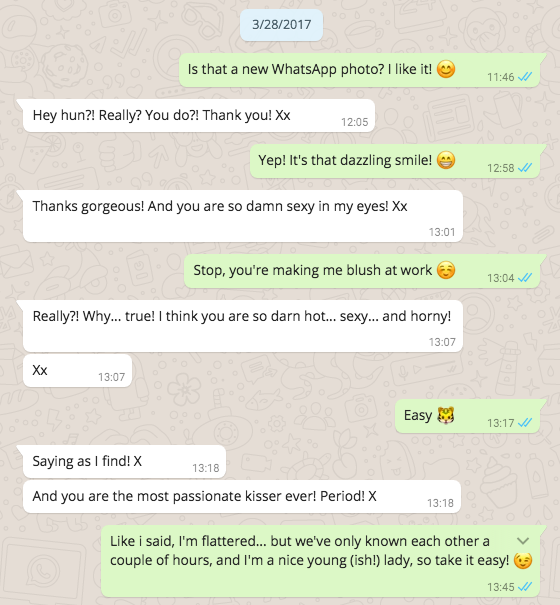 The day of the date arrives, but things take a turn for the worse.

Lucy panics that Peter has gone off her because she rebuffed his clumsy flirting, and is disappointed that the date has been cancelled.  But mostly she is pissed off because she got up early and washed her hair specially and now she is all dressed up with nowhere to go.

For days there is silence.  Maybe the fever was something more serious.  Lucy googles Peter’s name to see if his death has been reported.   Nothing.  So she messages him. 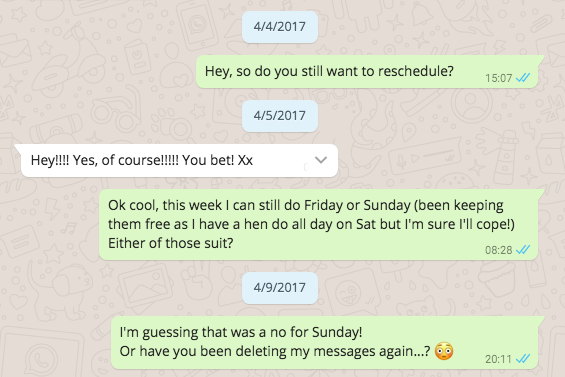 It’s starting to look as though the number of exclamation marks Peter uses is inversely proportional to the sincerity of his replies.

He seems interested, but he won’t be pinned down to a second date.  Lucy wonders what the fuck is with that – and whether bingeing on chocolate will help her figure it out.

Maybe the North Koreans have hacked WhatsApp and Peter genuinely isn’t getting her messages.  Lucy wants to give him the benefit of the doubt, so she sends a message via the Bumble app. 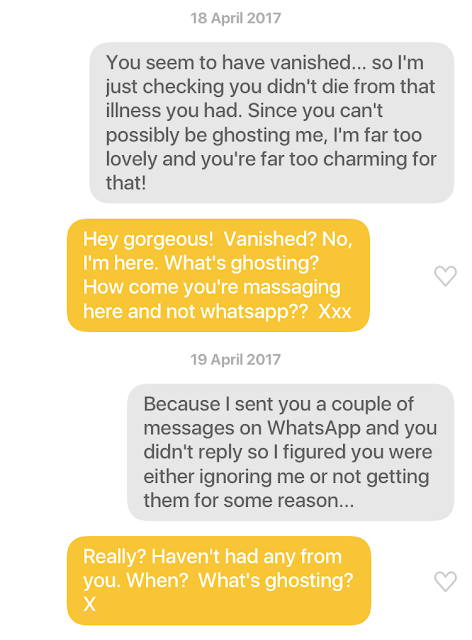 Lucy is even more suspicious.   A man who claims not to know what ghosting is?  Twice.  But it’s men that invented ghosting.  Lucy suspects Peter is protesting too much.

Nevertheless, she resends her previous message, and Peter immediately responds. 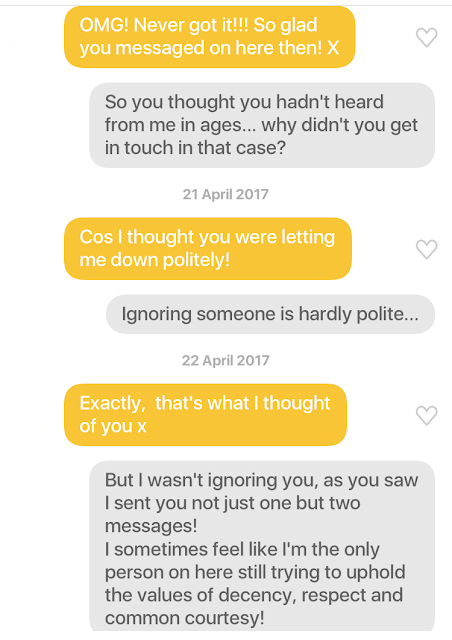 There’s no reply.   Lucy has no fucking clue what the hell is going on, but even she can’t keep flogging this dead horse any longer.  She pours herself a large glass of Sauvignon Blanc and starts swiping for someone new.

(To be find out what happened next, click here…)