Lucy’s matched with Mark from Bumble.
Mark appears to be very handsome but it’s hard to be sure as he only has two photos.  One is a head and shoulders shot with just blue sky behind.  The other is the same photo, only zoomed in.
Lucy wonders if Mark has arms and legs. She messages him to see if she can find out.

WTF? thinks Lucy.  We’ve met before?!
Lucy estimates she’s been on several hundred internet dates in her time, so it’s entirely possible she’s forgotten a few of them. But Mark’s photo is not familiar in the slightest.  She really doesn’t recognise him at all.
There can be only one explanation. Lucy is never wrong. Mark must have made a mistake.

Mark seems determined they’ve met before. How can this be?  If he’s right, she’s mortified!

Recently, on Bumble, Lucy came across a guy she’d had a date with about a year ago. At the time he’d asked her out again but she’d turned him down. So, out of curiosity, she swiped right and messaged him – and he completely didn’t remember her. Lucy was outraged.  He was supposed to have been heartbroken!

She really doesn’t want to be that person.  So she digs through all her old emails and WhatsApp chats to see if she’s ever dated anyone called Mark before. She ends up reading through some amusing past conversations and reminding herself of a few shockers… but there is no sign of Mark.

Then the penny finally drops.

Lucy met Mark in 2010 when she was travelling alone in New Zealand – back when she was younger and hotter but had just started dating The Ex. She’d just arrived in Christchurch and was eating dinner alone in a small cafe when Mark walked in. He was also on his own, he was attractive, and Lucy wanted to meet people – so she bravely invited him to join her. They ate together, swapped details and never saw each other again.

And now, here he is, 7 years later, single, and in London! This is perfect. Maybe the timing wasn’t right when they met before but now fate has brought them back together. This will be a great story to tell the grandkids.

Mark is a good, strong name. And he’s a lawyer. She can definitely introduce him to her parents.

Lucy goes to Facebook to check his profile out and see if she can glean any more information. But she hits a snag.

It appears that at some point in the last 7 years she has defriended him.

All she can see is his profile photo, which is of a young David Bowie, and his cover photo, which shows some pissed-off looking cats superimposed onto a representation of the Galaxy.

Well this is awkward. The only thing she can do is try to style it out. 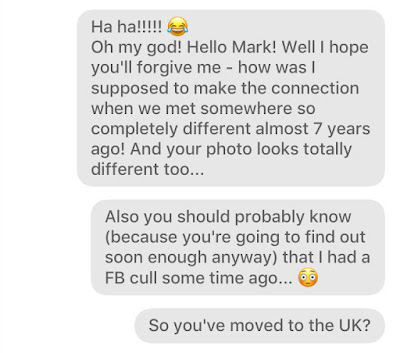 Lucy’s not sure what to make of this. Is he joking? It sounds like he’s joking. But she doesn’t know him at all, so maybe he’s genuinely offended.  After all, she didn’t believe him when he said they’d met before – and she’s also deleted him from Facebook.  This is not going well.
Lucy gives up on trying to style it out and tried to defend herself instead. 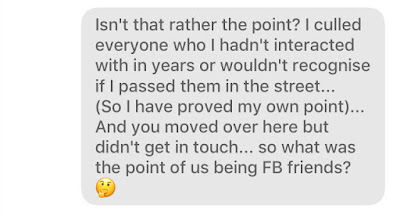 Lucy can almost hear the sound of crashing and burning as her dreams of a summer wedding to a handsome solicitor fall to pieces.  But might be ok, she thinks, there’s still a chance to rescue this, with a cheeky dig.

The fantasy bubble bursts and Lucy lands with a thud.

Admittedly things weren’t going brilliantly, but there was no need for that.

But maybe, just maybe, he’s still joking.  Doesn’t say much for his sense of humour, and it would be a pretty terrible joke to make via text with someone you don’t know, but a joke is now the best case scenario here.

Lucy’s not sure Mark deserves it, but she decides to give him one last chance.

Well what is that supposed to mean?  Was it a joke or not?  If he won’t apologise, or explain himself, what is Lucy supposed to say?

She decides to say nothing and see if Mark will come back with a better response later.  He doesn’t, and a few days after that he unmatches her.

Lucy has no idea what fate was playing at, but she wishes it would stop being such an arse.