Lucy has been asked on a date by Steve.  To read how this happened, click here.

Steve initially told Lucy he didn’t find her attractive, and only swiped right on her profile because he swipes right on everyone and then decides later if he likes them or not.

In other words, Steve is a first-class cockwomble.

Lucy told Steve exactly what she thought of this kind of behaviour, but rather than make him block her and move to a different county, her approach – astoundingly – seems to have won him over.

Crikey! she thinks.  That was unexpected.

She’s curious, but of course there is no way she can actually meet him.  Don’t forget he’s an arsehole, she reminds herself.

But then she reconsiders.  I’ve come this far, she thinks… why not take a risk?  Life is all about taking chances.  Who knows what might happen?  And at least I’d have a story to tell…

Steve wastes no time in making a plan.  Sort of.

Lucy should have known this would get weird.  The clues have been there since the beginning.  Who gives out their address to a random online date?  What sort of girl does he think would go round to a complete stranger’s house?  And WTF is with the “wear clothes” comment?! 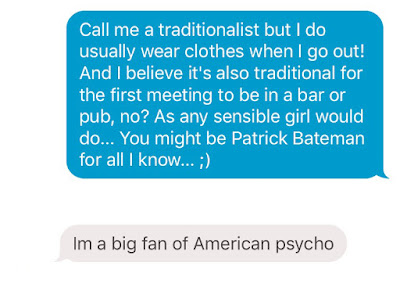 A big fan?!  Has Lucy got herself in too deep?  Is Steve going to turn out to have a penchant for inviting women back to his luxury bachelor pad in Westminster and slicing them up?

Not sure where this is now going, she offers a cautious reply.

Steve does not respond.

Either way, it’s been a lucky escape.

UPDATE: About six months later, Lucy is on a date when her phone pings.  It’s Steve.

Lucy will never understand what makes a man do this. She briefly considers asking him, but decides not to bother and goes back to her date.