After a series of unsuccessful attempts to meet a nice guy on Bumble, Lucy decides to try something new.  So she signs up to Happn, the app that tries to pair you up with people you’ve crossed paths with.

She thinks the idea of fate is pretty much a load of bollocks, but if the guys live or work near her, that’s got to at least make it easier when it comes to arranging dates.

Lucy soon matches with half a dozen guys, and efficiently sends each one a short hello message to get the ball rolling.

One of them is Steve.  Steve is 36 and says he likes “holidaying, wining and dining, and challenging himself to be a better man.”  His profile photo is a selfie of himself in a dark suit in front of a hallway mirror.

Lucy thinks the mirror selfie makes Steve look like a narcissistic wanker.  But he’s the right age and he’s not yet showing any signs of middle age spread.  Plus he says he’d like to be ‘a better man’.   Having spent 5 years battling to shape The Ex into the perfect boyfriend, Lucy’s encouraged by the idea of a guy who’s open to a little improvement.

But after a week or so, Steve hasn’t replied.  In fact, not one of her new matches has.

Lucy is royally pissed off.  This happens All The Time on dating apps and as far as she’s concerned, it’s just about the rudest thing there is.  Why do guys bother to swipe right if they have no intention of communicating when they get a match?  What is the fucking point?  Is it just an ego thing, so they can see how many matches they get?

Normally, Lucy would just let it go and move on, but not this week.  She wants answers.  This is one of life’s great mysteries, right up there with why doesn’t Tarzan have a beard and what on earth was Lost really all about?  So she decides to send a message to all of her non-correspondents, and see if any of them will give her answers. 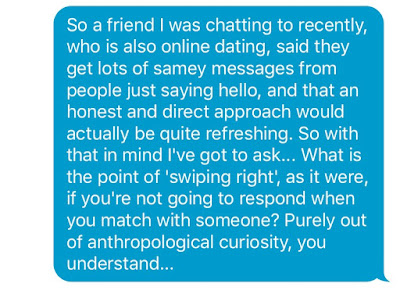 Amazingly, she gets a response.  It’s from mirror-selfie man himself, Steve. 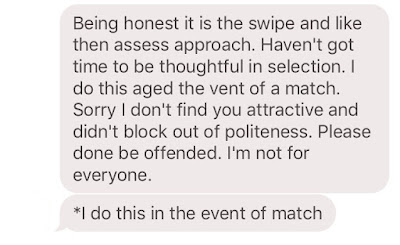 Lucy is literally speechless with fury. “Swipe and like then assess”?!  “Haven’t got time to be thoughtful in selection”??!  And most outrageous of all: “I don’t find you attractive”??!!

She pours herself a much-needed glass of wine and considers what to do next.  A sensible girl would just let it go and move on to the next one.  But Lucy has been ‘letting it go’ and ‘moving on to the next one’ over and over and Over and OVER for too long, and this time she’s not going down without a fight.

She’s also not about to let a self-absorbed prick like Steve get the last word.

So she messages him back. 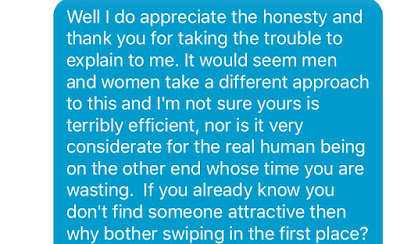 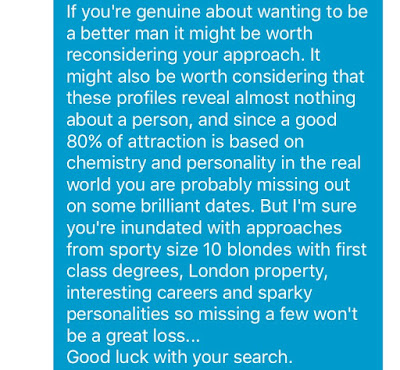 But far from being crushed by her argument, the next day, Steve replies. 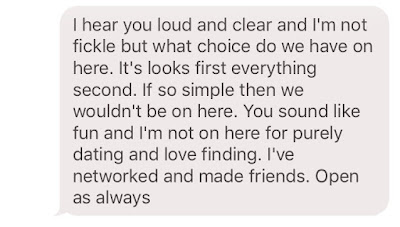 Suddenly this is getting interesting. Here’s a guy who could have unmatched or blocked her at any time, but he’s actually engaging with the conversation. And he seems intelligent, despite what the mirror selfie suggested.  Lucy’s starting to enjoy the debate.   So she bounces the ball back into his court. 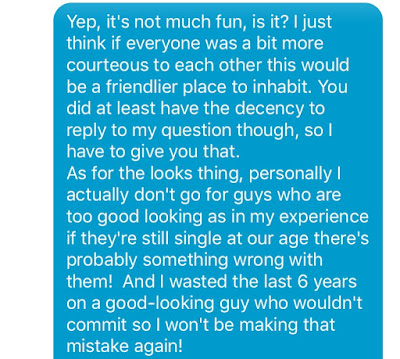 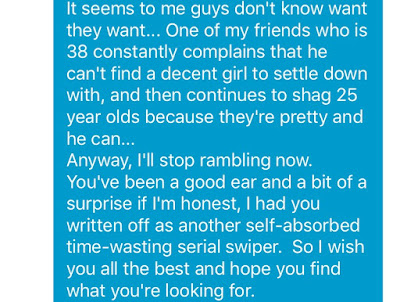 Nice, she thinks.  A couple of putdowns squirrelled away in there ought to get right up his nose.

This time she neither needs nor expects a reply, but not long after, there he is again.

Poor bunny. He’s all confused, and now he’s gone from “I don’t find you attractive” to calling her a “very sweet girl”.  Could this be because a woman who doesn’t look like a Page 3 model has turned out to be interesting, with brains and a personality?  What a revelation that must have been!

Now Lucy’s filled with a new missionary zeal.  She feels like Steve is on the cusp of a road-to-Damascus conversion.  She could be the one to open his eyes to a whole new world of possibilities, in which potential girlfriends don’t only come in 5’5, 32DD, perma-tanned packages.   Not that she wants Steve for herself, it’s far too late for that, but if she can change just one mind, it will have been time well spent. 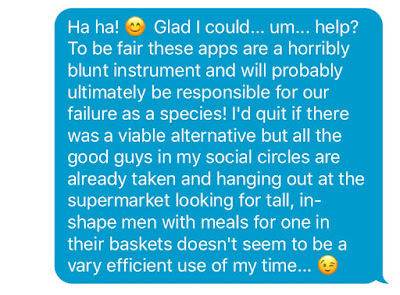 Steve quickly pings back a response.

That was not part of the plan.  The point was simply to win Steve over with the power of her wit and personality.  And that’s done.  Game, set and match.

But now things have taken an unexpected turn.  And the question is: should she accept…?