Lucy’s friend Amir has recently split up from his long-term partner.

Lucy and Amir met through work, and have been friends for about five years.  They don’t work together any more, but they have a feisty ongoing WhatsApp chat, and get pissed together every so often.

When they met, Lucy was living with The Ex, and Amir was with Julie.  Getting together was never even a possibility.  So they developed an easy, relaxed friendship based on brilliant banter, mutual appreciation, and a fair bit of innocent flirting.  Amir frequently praises Lucy for her talent and humour, which just goes to show what an intelligent and discerning fellow he is.

Amir is two years older than Lucy, and he’s funny, clever, and extremely handsome.  Also, he has the greatest hair known to man.  Other guys stop and stare at him in the street, and girls regularly chat him up on the tube.  Lucy’s sure it’s because of his thick, lustrous, dark head of hair, now lightly sprinkled with salt and pepper.  If Amir could bottle his hair genes and sell them to bald men, he’d be a millionaire in no time.

But in spite of the perfect hair, Lucy’s never really fancied him before, because he had a partner and two children. And because he comes across as a bit cocky (with hair like that, who can blame him?).  But mostly because he’s only about an inch taller than her, and Lucy doesn’t fancy short guys.  No matter how hard she tries.

And boy, has she tried.  She’s dated a few men who were the same height as her, and even slept with one or two.  But every time she gets up close and personal to a man who isn’t significantly bigger than her, she feels like a big fat butch lump of blubber.  And that’s just not sexy.

But although Lucy doesn’t lust after Amir, she has always thought of him as one of the Good Ones. You know, as in ‘why are the Good Ones always taken?‘  One of the ones you’re hoping will get divorced so you can snap them up second time round.

This, I’m afraid, is the lot of the late 30s single woman.  All the Good Ones have been grabbed already by girls who in their 20s were prettier and more confident than Lucy.  But statistics say that sooner or later a good 50 per cent of them are going to come back round again and this time, Lucy will have the last laugh.  In the meantime she’s been busy keeping her body as near gym-toned perfection as her wine and sugar addictions will allow, and getting eight hours sleep a night, so that when the next Good One becomes available, she’ll be the fantasy dreamgirl at the top of his wishlist.

Ok so fantasy dreamgirl might be a little optimistic, but she’s definitely doing better than quite a few of her smug married girlfriends on whom the pressures of motherhood have started to take their toll.

And now Amir is no longer taken.

He and Julie were together for 10 years and split up at the end of 2016.  Now he feels like he’s ready to dip his toe back in the dating pool, but is lacking confidence, and he’s started turning to Lucy. 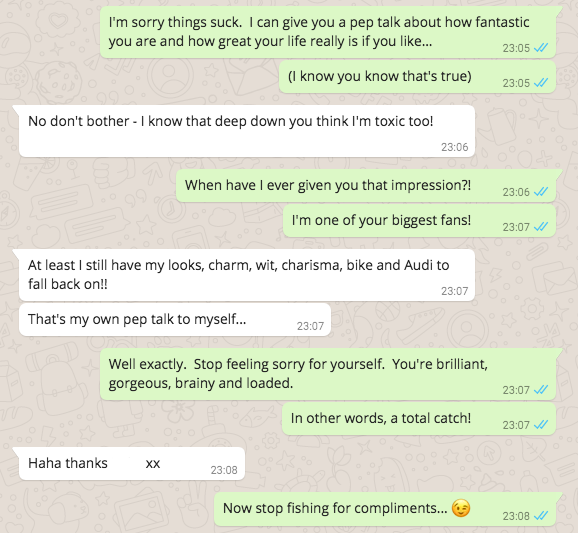 Amir has also started asking Lucy for her advice about online dating. 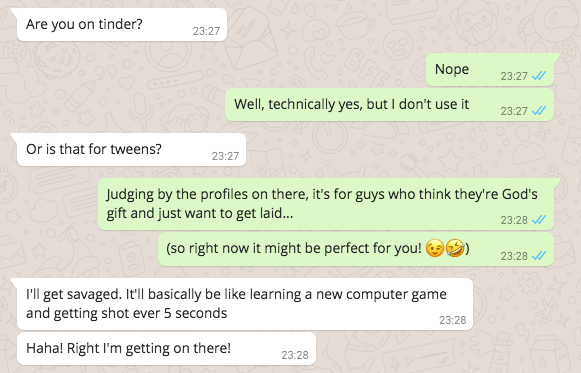 Lucy’s not sure how she feels about this.  On the one hand, a few nightmare experiences with the crazy women of the Tindersphere might help Amir realise what a total catch Lucy is.  On the other, she doesn’t want him doing anything stupid like going on just one date and meeting the new love of his life.

Which has happened at least two friends of hers.  Bitches.

But the thing is, although Amir might be considering getting back into dating, Lucy is pretty sure that he’s interested in her too.

At the work Christmas party, when he was drunk, he made a half-suggestion about coming home with her.  Lucy pretended not to understand and ran away.

More recently, he sent her a rather mysterious late night WhatsApp. 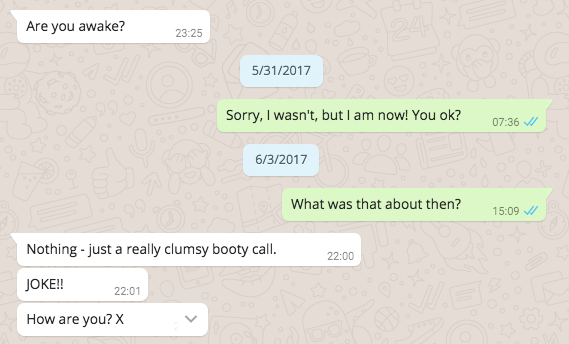 Ah, but was it a joke? Lucy wonders.

Recently, Amir and Lucy met up for a drink after work. One thing led to another and before she knew it… (no, it’s not like that, get your mind back up out of the gutter)… before she knew it, it was 2 am and they had sunk two bottles of wine and cocktails and were having the best laugh EVER.

At the tube station, they hugged for ages before going their separate ways.  Lucy got the strong impression that Amir wanted to kiss her.  What she doesn’t know is whether this is just him feeling single and lonely and wanting a little affection and reassurance, or whether he likes her.  Like, you know, wanting-to-be-in-a-relationship LIKES her.  Seems a little soon after his breakup for that, tbh. 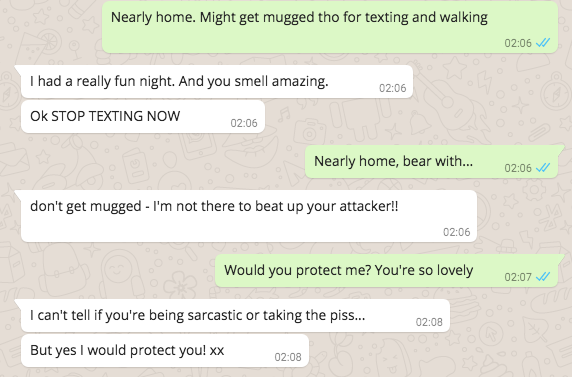 ‘You smell amazing’?  Is that really something you say to someone who’s just a friend?
Safely home, the chat continues. 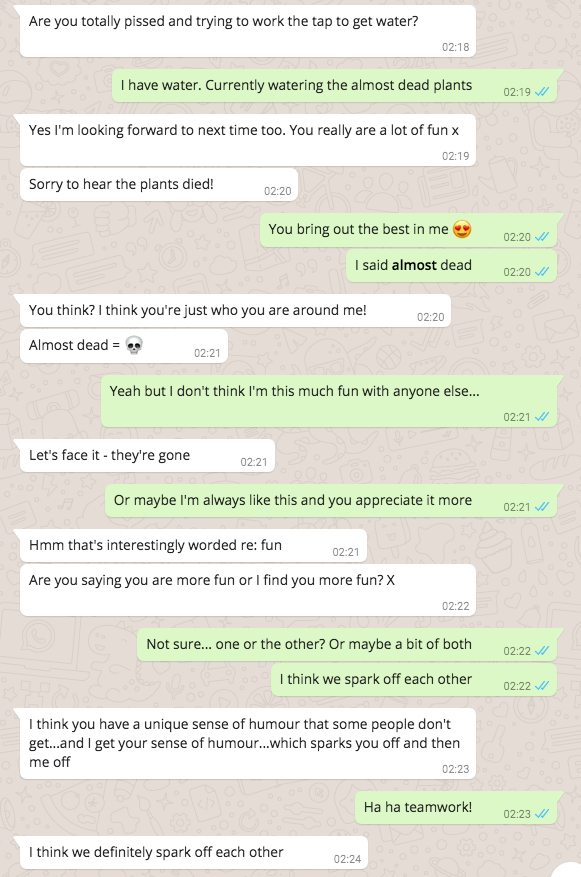 There is definite Chemistry here.  With a capital C.  But Lucy needs to be careful.  She’s not at all sure whether she has proper feelings for Amir or just has a lot of fun with him as a friend.  And also, she doesn’t want to ruin the friendship by getting messy with him when he’s on the rebound.
That said, The Ex got engaged to his rebound girl just five months after he dumped Lucy.  The cunting bastard.
But it does mean being the rebound girl might not be the worst thing.
After their drunken evening together, Lucy doesn’t hear from Amir for a few days.  And then out of the blue comes a strange request.

Lucy’s stomach does a little skip of excitement.  This is intriguing… what could it be?

Seriously, it’s not as if Amir needs to practise talking to women.  He’s charming and chatty, he meets new people through work all the time.  It’s not like he’s socially awkward.  He doesn’t work in fucking IT, for Chrissake!

But this is good gossip. She shares screengrabs with her friend Lily, to get a second opinion.

Lucy and Lily have known each other a short time, but already they are BFFs.  They have top level fun together, and agree on everything (just once, Lily disagreed about something, and Lucy was really shocked – until she discovered that it was just a misunderstanding and Lily did actually agree with her after all).
Lily gives great advice on everything from work to boys to fashion, and can always be relied up on to say it as she sees it, with no sugarcoating.  Lucy thinks Lily is just The Best.  Sometimes she wishes they were both gay so they could get together and Lucy could be done with stupid fucking men once and for all.
But sadly both Lucy and Lily prefer boys.  We all have our crosses to bear.
As usual, Lily gives her sensible clear-cut analysis of the Amir situation.

So she’s not imagining it.  Amir just asked her out on a not-a-date.  This is very exciting indeed.
They do always say the best relationships begin with friendships, and Lucy likes Amir a lot.  Plus he ticks most of her boxes apart from the height thing and the fact that he has two kids.
Which to be fair, are both pretty big deals.   But nobody’s perfect.
So Lucy accepts – taking care to keep up the pretence that this is just a helpful friends thing.  Which, you know, it might be.  Men are weird and dysfunctional and Lucy doesn’t understand them at all.  So it’s entirely possible that in Amir’s fucked up man mind this is a perfectly normal thing to do with someone who is just a good friend. 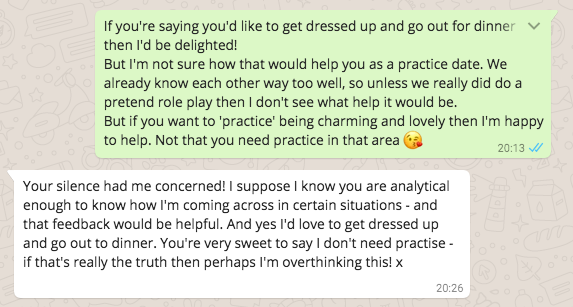 Amir is off on holiday for two weeks, so they leave it there.  It remains to be seen whether he will get in touch once he’s back, or whether he’ll have shacked up with some 28-year-old hottie by then.  Lucy wouldn’t be surprised.
To find out what happened, click here.