Lucy has matched with Daniel.  Daniel is 45, has brown hair, and looks a bit like David Tennant.  Lucy is deliriously in love with David Tennant.  She even took up watching Doctor Who, and sat through dozens of ridiculous episodes, because of him.  (So she was bloody relieved when he quit.)

David Tennant is 6 feet tall.  Daniel doesn’t give his height in his profile.  Lucy examines his photos to try to work out if that means he’s short.  In general, tall guys always boast about their height, but short guys try to hide it for as long as possible, so Daniel is probably short.  This is disappointing.

In one of the photos, Daniel is lying in the road.  Behind him is a bicycle.  Lucy tries to analyse the relative sizes of the bike and Daniel to try to work out roughly how tall he is.  How long is the bicycle?  How far away is it from Daniel?  What effect does the perspective have on their relative sizes in the photo?  Why is he lying in the road anyway?

It turns out Daniel works in the same industry as Lucy.  He even worked at the company she’s currently based at until just a few weeks ago, and knows many of the people who still work there.

Lucy is delighted.  Maybe Daniel could be The One (despite probably being short).  They missed each other by a couple of weeks, but maybe fate just needed a little helping hand in the form of a dating app to bring them together.  She wonders if ballet flats would go with a wedding dress.

Then Lucy remembers that in 14 years, she has never met a decent, straight, single man working in her (female-dominated) industry.  All the men are either married, gay, or arseholes.  So if David is single, what is wrong with him?

The quickest way to find out, she reasons, is simply to ask him. 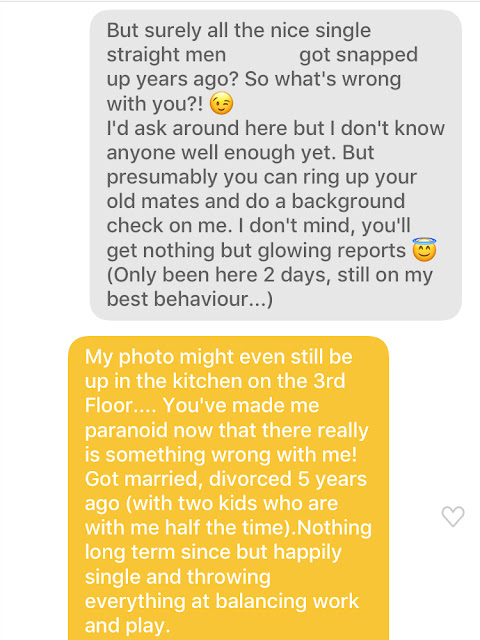 Lucy is not sure about dating a man who already has kids.  On the one hand it means it’s likely he won’t want any more, which is fine by her.  Lucy enjoys sleep, freedom, travel and disposable income far too much to give it all up.  Especially not to become a slave to some tiny psychotic dictator.

But on the other hand a man who has kids will always have other priorities.  And dating a dad would mean she would have to pretend to like Other People’s Children.

Then she remembers Daniel looks like David Tennant, so she decides to give him a chance.

Lucy turns to the company intranet to see if Daniel is still listed there.  This is not stalking.  This is research.  Research is allowed – and in fact is even advisable.  A sensible girl will always check out her date online if she can, she reasons.  Just in case he turns out to be a convicted criminal.  Or a vegetarian.

There are five Daniels in the company phone directory.  Lucy googles all of them but nothing of interest comes up, except that one of them shares his name with a top rugby player.  Either that, or the top rugby player has quit sports and is now working in HR for Lucy’s company.   She makes a mental note to check out the boys in HR next time she visits the second floor.

Lucy and Daniel agree to meet for cocktails after work.  He reveals that he has only recently joined the online dating world and this will be his first actual date.

This could be a problem, she thinks.  Online dating is like house hunting.  You need to experience a few rubbish ones, a few that have been mis-advertised, one or two that are falling-apart and smell weird, before you can appreciate the good ones.  If you see the perfect house on your first viewing, you won’t recognise it.

Lucy is not a mouldy and cramped ex-council flat described by a cocky estate agent as ‘a stylish and spacious city dwelling with opportunity for redevelopment’.  She’s a gorgeous (and yet reasonably priced) Victorian conversion with high ceilings and outside space.  Daniel has hit the jackpot on his first roll of the dice.

But if he’s never been ghosted, or stood up, or had to sit through one excruciating hour with someone weird or boring, how will he know that he’s struck gold with Lucy?

Daniel has peaked too early.  All Lucy can do is hope that he’s sensible enough to recognise a good thing when he sees it.

Lucy is determined to make this the best date ever and be Daniel’s first – and last – internet date.  But if that fails, then at the very least she plans to set the bar high.  This date will be the gold standard for all that follow.  In 20 years time, Daniel will still remember the girl who popped his internet dating cherry and wish he hadn’t let her go.

She selects just the right outfit – a casual dress that says “I’m feminine and have great legs but I haven’t actually made all that much of an effort”.  Flat shoes in case he’s short.  She even plucks the stray hairs out of her chin and upper lip.  And heads out to meet him…