The events depicted in these posts happened in 2017. At the time I believed Al to be a good guy. Since these posts were written he has proven to be otherwise. If you come into contact with him, please be careful.

This is a story about how Lucy got asked on a date via Twitter.

Actually, no.  Not Tinder.  Twitter.  Here’s how it happened…

Lucy has only recently joined this popular social media platform, and she doesn’t really understand it. Currently she has about 130 followers – which doesn’t seem like very many.  Lucy wants more.  Having hundreds of followers will make her feel loved and popular – even if she doesn’t know any of these people and at least half of them may be robots.

So Lucy is looking at Twitter to see if there is anyone interesting on there whom she can tweet at in the hope that they will follow her.  She spots a chat between Tinder Girl and a guy called Al.

In his profile picture, Al is clearly sporting a large and bushy beard. 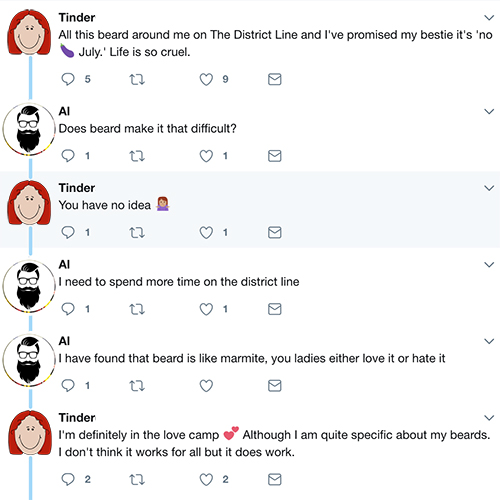 Personally Lucy has no idea how anyone could love a beard, and reckons the girls who say they do are only pretending because they like the man underneath and they’re hoping that in time they can persuade him to shave it off.

Lucy doesn’t have nearly enough patience for that sort of thing.  She hates beards.  More than she hates wet dogs, slow walkers, and unexpected items in the bagging area.

As far as she’s concerned, the current obsession men have with growing haystacks on their faces is hideous and obscene and ought to be made illegal.  It’s hard enough for a girl to meet a nice man as it is, without two thirds of them immediately ruining themselves by hiding their perfectly decent faces behind an impenetrable thatch of wiry fluff.

The worst is when attractive young guys, with slim figures and well-groomed hair, entirely destroy their features with the addition of a foot-long matted rug that wouldn’t look out of place on a desert island castaway.

As far as she’s concerned, the only people who should legitimately be allowed to own any kind of facial hair are lumberjacks, old testament prophets, 18th-century scholars, and Arctic explorers.  For anyone who has access to clean water and a razor, there is simply no excuse.

Yes, Lucy hates beards.   So she joins in the conversation.

And swiftly, she gets a response from Al. 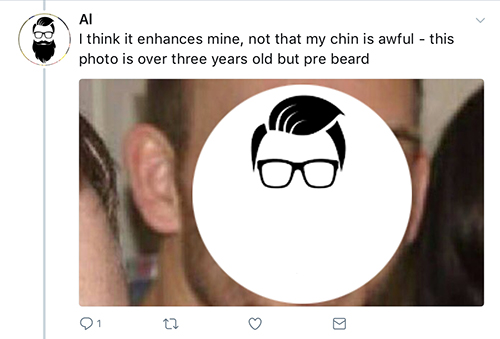 Lucy looks at the pre-beard photo.  Al has a friendly face and good hair, with just a small amount of stubble.  Lucy thinks he looks very handsome.  It’s certainly a vast improvement on the ridiculous face fungus he’s currently sporting.  She tells him so. 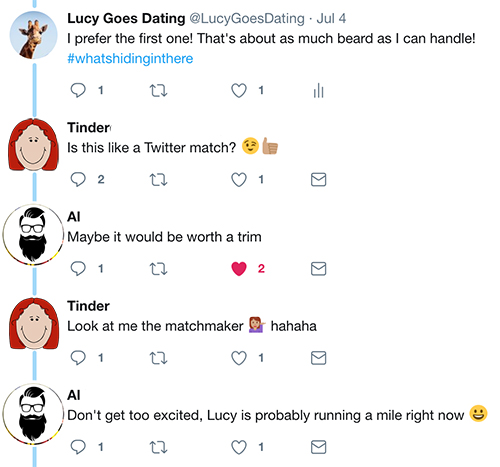 Lucy is rather disconcerted.  Is Al flirting with her?  After she slagged off his chin wig?  This is her first proper Twitter conversation with random strangers, and already it’s taken a rather unexpected direction.  She hesitates, not quite sure what to say. 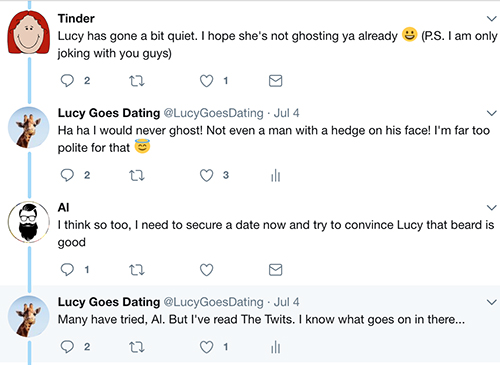 Al seems like a decent guy but he’s quite clearly joking.  No one in their right mind would ask someone out on a date after just a few exchanges on Twitter.  Especially given that Al has no idea what Lucy looks like.  Her profile photo is of a giraffe.  Admittedly it’s a rather attractive giraffe, with large brown eyes, long eyelashes, and a cute smile, but still, it’s a fucking giraffe.  If Al fancies giraffes, his problems are far greater than just the beard thing.

Lucy googles the number for the RSPCA helpline, just in case.

So Al can’t really be gunning for a date, since no one in their right mind would ask someone out without knowing what they look like.  Lucy could be 85 years old, or 85 stone, or even a man.

But the banter is fun, and Al seems to be doing his best to convince Lucy of the merits of beard ownership.

Lifeboat?  Lucy takes a look at Al’s profile.  He says he’s a 32-year old mechanic and lifeboat crew member, and has tweeted photos of lifeboats.  Lucy can’t help being impressed – the man is an actual fucking hero. Not to mention the fact that if he’s a lifeboat volunteer he must be (a) a Good Person, and (b) pretty damn fit.  Not that she’s going to let him know she’s impressed.  That’s not how this game is played. 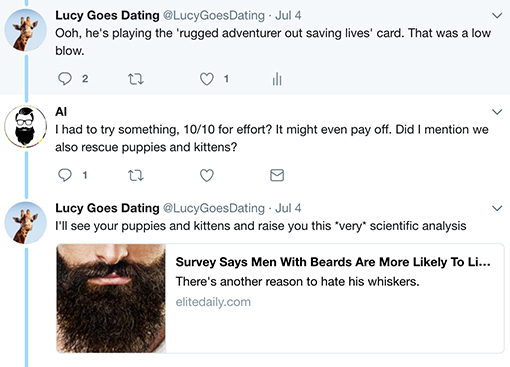 The article in question says that men with beards are more likely to lie and cheat than men without.

Aha!  Al has inadvertently proved her point.   Everyone knows Jesus was a massive con artist, and that Santa breaks into people’s houses at night and encourages little kids to sit on his lap – so he’s probably a paedophile.  Further proving that men with beards are not to be trusted. 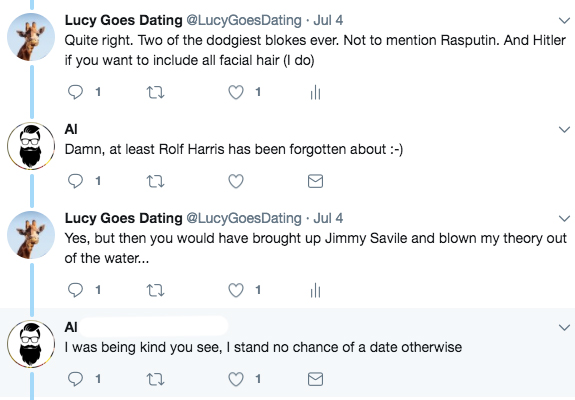 Lucy admires Al’s persistence.  The problem is, even if he’s serious – which clearly he can’t possibly be – but even if he were, there’s no way she can actually meet him.  There is already far too much personal information about Lucy online.  Al could easily read her messed-up dating stories and jump to all sorts of conclusions.  Not to mention the fact that he would immediately find out about her tendency to neurotically overthink everything.  And then he will definitely realise she’s a crazy person and run a mile. 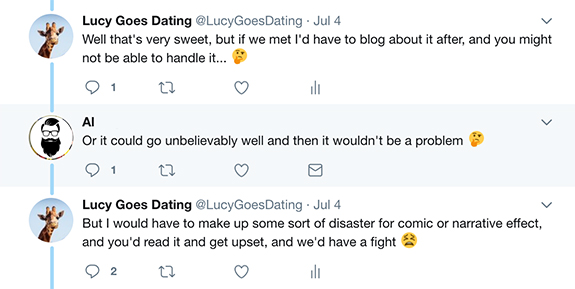 Bizarrely, in spite of the beard, Lucy is starting to find Al extremely attractive.  He has a handsome face, he’s funny, and he seems intelligent.  Not to mention the full-on action hero thing.
But of course they can never meet.  Quite apart from anything else, Lucy’s pretty certain Al is a good five years younger than her. When he finds out her age, there is every chance he will lose interest.
Still, 5 years younger, and an action hero.  Lucy’s willing to bet Al has quite a hot body. 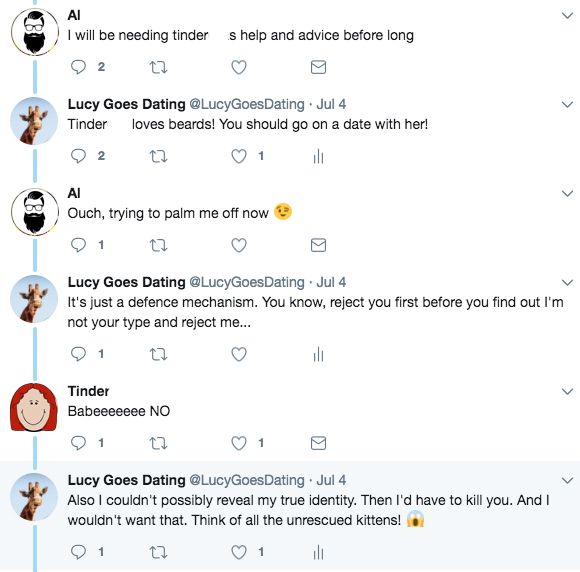 But even though Al and Tinder Girl share a love of beards, Al does seem to be more interested in Lucy.

It’s the chase, she realises.  Like all men, he likes a challenge.  He wants to pursue me like some fucking Neanderthal chasing after a woolly mammoth.

While Lucy could stand to lose a few pounds, and is frequently too lazy to shave her legs, she’ll be damned if she’ll put up with anyone comparing her to a hairy prehistoric herbivore.

All the same though, it’s nice to have a bit of an online flirt.  So Lucy decides to continue the chat and see what happens.