The events depicted in these posts happened in 2017. At the time I believed Al to be a good guy. Since these posts were written he has proven to be otherwise. If you come into contact with him, please be careful.

Lucy has been chatting with a guy on Twitter.  If you missed it, you can read the story so far here.

Al is a 32-year old mechanic and lifeboat crew member, and unlike so many of the twats and weirdos out there, actually seems like he might be moderately sane and normal.

Sadly, as always, there’s a catch.  While Al may seem like a nice enough guy, he has a fatal flaw: his apparently good looks are almost entirely obliterated by an obscene amount of facial hair.

And beards, as any sensible girl will tell you, are fucking gross.

Normally Lucy would take one look at a bearded man and briskly cross the street to avoid him. But there’s something about Al that has picqued her interest.  For one thing, he’s has been publicly flirting with her in 140 characters or fewer, and it turns out that in spite of the obvious stupidity in growing a beard, he’s actually pretty sparky.  For another, he’s an ex-army hardman turned lifeboat rescue hero, so he’s got at least twelve thousand sexiness points right there.

But so far it’s just been a bit of banter – and clearly that’s the way it’s going to stay.  Idle online flirting, a bit of fun, nothing more.  Nice guys don’t go round asking random girls out via Twitter – particularly not when they haven’t even seen a photo.  That’s just not how it’s done.

But then Lucy receives an extremely surprising private message.

Lucy is flabbergasted.  A man who knows almost nothing about her, and who has no idea what she looks like, wants to meet her.

Of course, there is a chance that Al has read all of Lucy’s adventures online. If that’s the case, he’s probably just come to the conclusion that she’s sufficiently sad and desperate for him to be able to get a shag out of her if he plays his cards right.

In other words, a pretty normal guy.

On the other hand, there’s no way he can have read the stories. If he had, he would never have approached her.  The revelations about her sex life (or lack thereof) and her neurotic thought-processes would definitely have put him off. 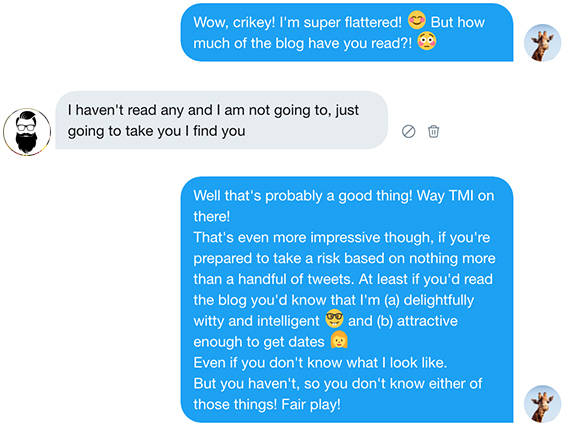 So he claims not to have read Lucy’s ramblings.  In that case what is wrong with him?  Is he desperate?  A fuckboy just looking for somewhere to put his dick?  A scam artist who is going to try to steal all her money?

Of course it is just possible that Lucy has managed to win Al over simply by the power of her wit and personality.  It’s happened before, with Steve.  But it that really likely?

On the balance of probability it seems far more feasible that Al is a serial killer. 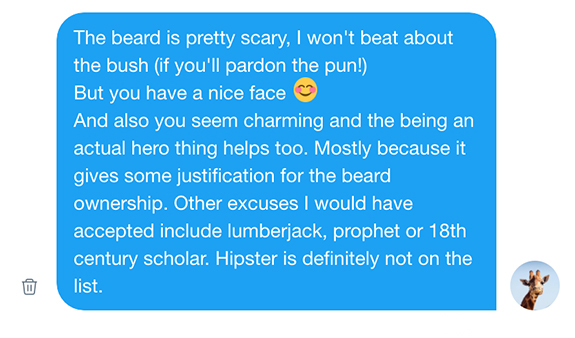 Al assures her he’s not a hipster.  He tells Lucy that he is 6 feet tall, and has tattoos to go with the beard. He also has two kids. 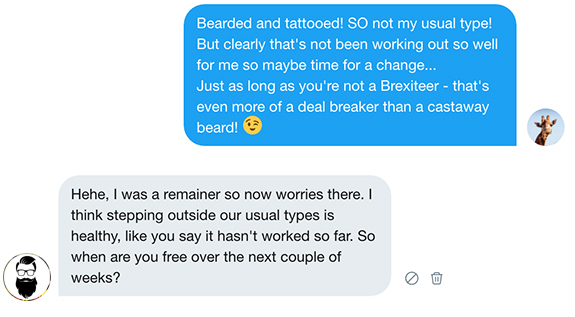 A bearded and tattooed mechanic and dad, who is 6 years younger than her, is a huge departure from the clean-cut, highly educated, geeky, slightly older types Lucy always goes for.

But at least he can spell. That would have been bigger deal-breaker than the beard.

And it’s not like Lucy’s normal type has been working out so well for her.  She wonders if maybe it’s time to take a risk. 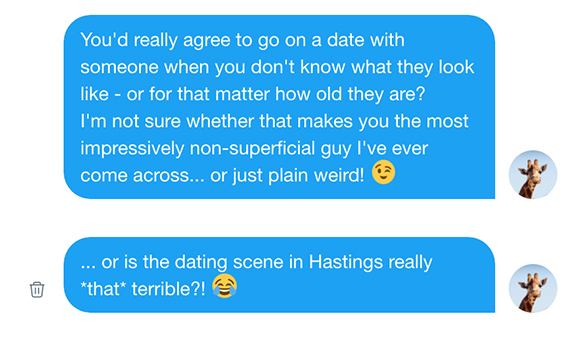 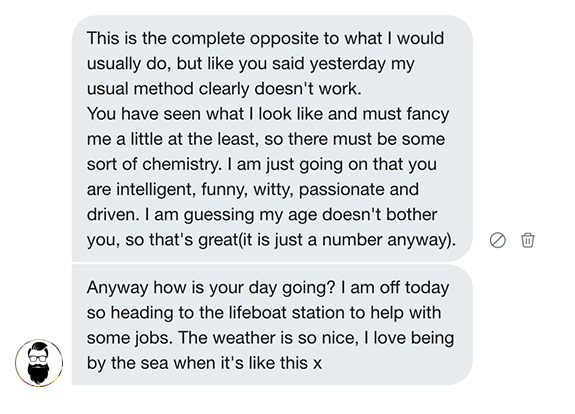 Lucy is finding herself rather attracted to Al.  He just seems, well, like a Good Guy.  And Lucy has met so many arseholes through online dating that Al’s no-bullshit decency seems to shine off the page. She starts looking forward to getting messages from him and checks her phone every half hour to see if he’s replied.

He seems genuinely interested in her for her personality alone.  He had the sparkiness to ask her out, knowing almost nothing about her, and he still hasn’t asked to see a photo.  Lucy is impressed.

She wonders how many dates they have to have before she can ask him to shave off the beard. 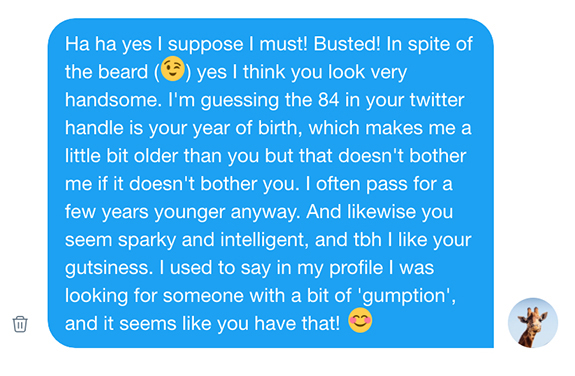 But while Al seems like a nice guy, Lucy wonders if she could really have a relationship with him.

Does it matter that he’s a mechanic and not a lawyer or a doctor?  Will he pour scorn on Lucy’s sheltered middle-class upbringing?  Does it matter that he probably doesn’t shop in Waitrose?  That his toaster probably doesn’t have a bagel setting?  That he almost certainly won’t know the difference between ricotta and mascarpone?  Will he sympathise when her cleaner fails to show up, or when she buys ‘perfectly ripe’ avocados that turn out to be rock solid?And most importantly, could Lucy ever bring herself to kiss a beard?

Lucy’s certain that 10 years ago her mum (who is exactly like the mum from Bridget Jones) would have been visibly disappointed if she brought home someone who didn’t have at least one degree from a top university.  But now Lucy’s mum is so desperate for her spinster daughter to settle down that she’ll be delighted with just about any man who’s willing to take Lucy off the shelf.

Even, probably, one who’s a serial killer.  As long as Lucy can manage to squeeze out a grandchild first before she gets hacked to pieces.

So Lucy accepts.  Nothing ventured, nothing gained.  And if it turns out badly, at least she’ll have a good story.

Assuming her body hasn’t been dumped in the sea by that point.

They agree to meet at a pub near the train station in Lewes, which is a compromise between where Al lives in Hastings and Lucy’s base in Brighton.

But Al still hasn’t asked to see a photo.  Lucy’s not sure what to make of this.  She reckons he must want to see one but is too afraid or polite to ask.  But she decides to send him one anyway.

Apart from anything else, she does it as a favour to any random girls who might be sitting on their own in the pub. She doesn’t want them to get accosted by a weirdy beardy stranger claiming to be looking for ‘Lucy’.

Al is delighted with the photo.

As she boards the train, she’s nervous.  Lucy is not normally nervous before online dates (she’s been on far too many to care any more), but this will be her first ever Twitter date, and her first ever date with a beard.

Lucy wonders if she will find the beard off-putting.  She may not be able to stop staring at it.  Will she find it repulsive up close?

And if the date goes well, will she have to kiss it?  She wonders what that would be like. Probably like nuzzling a hessian sack.  Seriously, WTF is up with all those women who like beards?

Still, there’s only one way to find out. The train pulls in to Lewes station, and Lucy gets off.