With all the goings-on with Al and Amir, you’ve probably forgotten all about Peter, the guy who works in radio who was only interested in Lucy for One Thing.

If you’re new here (in which case, welcome!), or you’d like to refresh your memory, you can read from the beginning here.

Lucy is absolutely fine with their relationship being only about that One Thing.  Peter, as it turns out, is quite good at it, and certainly wasn’t at the back of the queue when endowments were being handed out (if you know what I mean, nudge nudge, wink wink, say no more).   And since Lucy seems to spend her entire fucking life going on mediocre dates that never lead anywhere, or lusting after men that aren’t interested, or going on promising dates with guys who then vanish before things can progress to the getting naked stage, it does help to have a safe, skilled pair of hands (and other body parts) to fall back on when she’s got an itch that needs scratching.

So while she’s waiting to see if things might go anywhere with first Al, and then Amir, she’s stayed in touch with Peter.  Just in case everything goes tits up and she needs a consolation shag.  Hey, don’t judge, we all have needs.

Peter is the perfect Friend With Benefits.  He’s nice but definitely not future husband material, he’s enthusiastic in bed, and when they’re not together he leaves her alone until she calls on him.

Though sometimes Lucy thinks its a bit strange how completely he vanishes for weeks between hookups.  And when she chats to Lily about it, it occurs to her that maybe there’s a reason for that.

Could it be that Peter isn’t single after all?

As Lily points out, it’s a bit suspicious.  For one thing, he always comes to Lucy’s.  He says this is because he rented out his flat for a while and is currently staying with his mum until the tenancy expires – but what if it’s actually because he has a wife at home?

Also, he only ever visits in the afternoon and is gone by 6 pm.  His excuse is that he works very early shifts and needs to go home and sleep – but again, what if that’s a lie?

Lucy doesn’t want Peter for herself, but she’s totally Not Cool with shagging another woman’s fella. So after a couple of weeks of silence, she decides to challenge him. 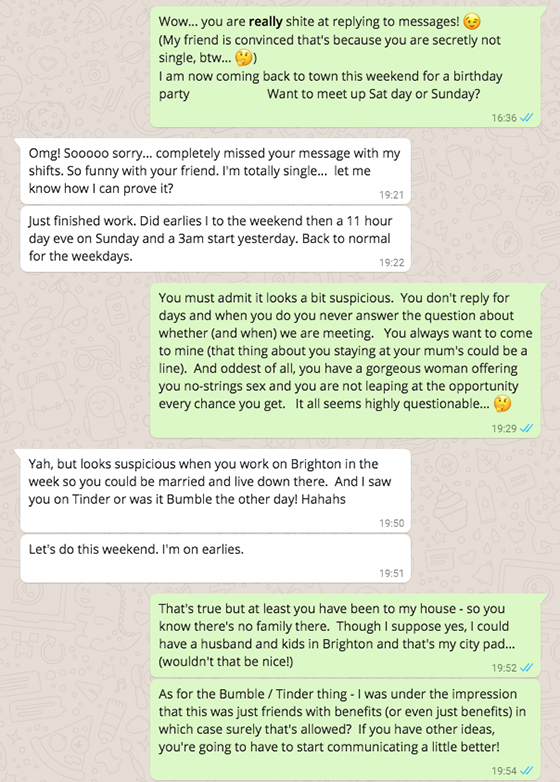 Is Peter actually annoyed that he spotted her on a dating app?  He’s never made any suggestion that he’d like to be anything more than just fuck buddies, so it’s a strange thing to bring up.

They arrange to meet the following weekend.  Lucy is looking forward to it – it’s been ages since she had any action and she’s starting to feel like she might have some sort of embarrassing public outburst for no reason if she doesn’t get some physical contact soon.

So when he cancels on her a few days later, she’s pretty fucking pissed off.

It’s poor English (and spelling) like this that is exactly why Peter is definitely not husband material.

But Lucy is also intrigued by his comment that he may ‘lose’ her (not ‘loose’, Peter you fuckwit).  She’s made it clear to him that she’s dating other guys, and that if she meets someone their happy little arrangement will have to cease.  So could it be that Peter is getting just a teensy bit jealous?

Regular readers of this blog will correctly guess that the mate in question is none other than Amir, with whom Lucy is still embroiled in a weird situation where she has to carry on acting as though they are just good friends who gossip about their dating experiences, even though she would actually like nothing more than to be having those dating experiences with Amir himself.

‘You do really respect me?’ Lucy thinks. What the actual fucking fuck?  Does that really need to be said in this day and age – like there might be some doubt that a man could respect a woman just because she wants to have sex with him?!

Happily, a sarcastic tone of voice doesn’t translate into texts:

However since Peter does respect her after all (Yay! Go Peter the Modern Man!), and since he swears he’s definitely single, they rearrange the ‘date’.  But this time Peter has an unusual request.  He wants to take Lucy out to lunch.

This is odd, since until now their previous encounters have been rather functional.  Peter turns up at Lucy’s house in the early afternoon, they have a drink and a chat, then have sex, and he leaves by 6pm to go home to bed ahead of his 5am shift.  Lucy, meanwhile, can have a shower and go out for the evening.  It’s all terribly, satisfyingly practical.

But now he wants to take her out for lunch.  Is this an actual date? But why?

The only possible conclusion Lucy can come to is that her genuine lack of interest in Peter as anything more than just a fuck buddy is like a red rag to a bull.   She’s entirely chilled around him, she tells him about the other guys she’s dating (so he knows about Al and Amir), and she doesn’t make any kind of effort when he shows up.  Apart from a minimal defuzzing of her ladybits, of course.  Lucy does have some standards.

Clearly this don’t-give-a-fuck attitude is what’s now attracting Peter.  And it’s probably what first attracted Amir, back when they were just mates and she was able to be herself because she wasn’t hoping to get in his pants.

Lucy makes a note-to-self to try to recapture fake that same attitude in her future dealings with guys she likes.

As for Peter, it remains to be seen what his intentions are.