Lucy is meeting her friend Amir for a drink.  Except now that Amir’s broken up with his long-term partner, she’s not sure if they are still friends, or something more.  This might be a sort-of-date, and she’s nervous.

(To read the story from the beginning, click here)

It’s Sunday evening.  Lucy is on her way back to Brighton and has a suitcase in tow, so they agree to meet at Victoria station so she can hop straight on the train afterwards.  Amir arrives first, and texts to say he’s waiting in the seating area opposite the departure boards.

Lucy spots him as she crosses the concourse.  He’s wearing grey jeans and a black shirt, and is looking down at his phone.  Just seeing him sitting there makes her blood pump a little faster.  Holy fucking crap, she thinks.  This is a proper, honest-to-goodness, schoolgirl crush now.  Shit, I’m in trouble.

As she approaches she wills him to look up and spot her, so he’ll clock the full effect of the hour she spent getting ready.   But clearly he’s far too busy swiping on Tinder or texting some other girl, because he bloody doesn’t. FFS.

He doesn’t actually notice her until she’s standing right in front of him.  His hair is mussed up, he hasn’t shaved, and his jawline is softened by grizzled stubble.  His brown skin looks slightly sallow, and his dark eyes – so deep dark you could drown in them! – are tired.

He stands up and gives her a long hug.
“You look knackered!” Lucy teases.
“Thanks. You look hot.”
So the effort was worth it – hurrah!  “Well, so do you.  Hot but knackered.”
Amir takes her suitcase (tick) and they head for a nearby bar where he buys her a drink (two ticks).

“So how’s the dating going?” he asks.  Always so interested in Lucy’s dates. Is that because he’s her friend or because he’s jealous?

Lucy tells him about a recent date, in which the only event of note was that the waitress was so awestruck by Lucy’s curly hair she asked if she could touch it.
“Well your hair is amazing,” Amir says.  “Now I want to touch it!”

Lucy has always been convinced that her bouffant curls make her look like a middle-aged saddo who hasn’t changed her style since the 80s and is still hoping that legwarmers and neon are going to come back into fashion.  But if Amir likes her hair, then he’s more than welcome to touch it.  In fact, he’d be most welcome to touch any part of Lucy he likes.
He reaches over and plays his fingers through the curls.  “It’s so soft!”
Lucy leans closer.  The experience of having her crush touching her makes her tummy feel funny.

Are they having a moment?  Lucy hasn’t drunk nearly enough yet to know what to do.   She takes a gulp of wine to speed up the process.

“I’m going to start going on dates soon,” Amir says.  “But I have no clue.  Might need your help.”

In no way whatsoever does Lucy want to help Amir find dates online, but they are still in the dreaded Friend Zone, so she basically has no bloody choice.

Against her better judgement she therefore spends the next twenty fucking minutes showing him Tinder, Bumble, Happn and the rest, explaining how they work, and giving him the critical dos and don’ts of guy dating profiles.
“No mirror selfies, no topless shots, and write something in your bio, ” she advises.

Idiot.  Should’ve told him that girls like crotch shots, gym shots, and pictures with other women in them.  Anything to ensure he gets as few matches as possible.

“But I don’t have any good photos of me at all,” he complains.
“Why don’t I take one for you now?”  What did you say that for?  No wonder you’re single, you fucking twat.
She pulls out her phone and snaps a picture.  Amir is resting his head on his hand and looking down the lens with a slight smile.  His hair is messy and he has a day’s worth of stubble, but he looks sexy AF.
This can’t be far off what he looks like first thing in the morning, she thinks, wistfully.  And the photo will be something pretty to look at on the train journey back to Brighton. Not to mention every morning, noon and night until the End Of Fucking Time.

She texts him the picture and puts her phone away.  “So anyway,” she continues, “the main rule of online dating is: don’t be a dick.”
“I’m not a dick.”
“I know you’re not NOW, but after 6 months of online dating, with all the different women that you’ll encounter, you’ll probably become one.”
“No I won’t.”
“Six months. Tops.”
“Show me your profile?” he asks.
She shows him.  Obviously making sure she lingers over the photos that make her look her best.
“You look gorgeous,” he tells her.  Score.
“Well if you join Bumble you’ll probably see me on there… depending on how you set your search settings.  But you might only want girls under 35, in which case you won’t see me.”
“What if I’m searching for gorgeous confident, over-35s with amazing hair?”
“Well I guess then you’d find me!” she grins.
“I’d definitely swipe right if I did. Would that be ok?  Can I do that?”
“Well I’d swipe right to see if you had, and then if we didn’t match I’d be offended.  So you’d better bloody swipe right. I know where you live, remember?”

If the only way she can get a date out of Amir is to match with him on an app, Lucy is going to fucking kill herself.

“Thing is, I won’t want to match with anyone because I’d have to go on a date and I won’t know what to do,” complains Amir.
Fuck’s sake mate, this is getting a bit whiny now.
Lucy dredges up some patience for yet another pep talk. “Of course you will. It’s just chatting to a stranger.  You do it all the time.”
“Maybe we should go on a date.”

And there it is.

Or is it? Lucy blushes, looks away.
“OK, sure,” is all she can manage.
And then the waitress comes over and the moment is gone.

Later, she berates herself.  WTF happened there?  Did he ask me out or didn’t he?  She should have looked him right in the eye and said “You want to go on a date with me?”  Then waited for him to give her a proper answer.
But she fucked it up like a stammering teenager with a crush and now she is going to spend the next week (month? year?) overanalysing that moment and what might have happened if…

Over dinner of arancini balls and pasta at a little Italian, Amir talks about his relationship history, and Lucy learns some unnerving things.

He cheated on Julie once.
“I’m not proud of it,” he tells her.   “We were going through a rough patch, and she’d gone away to try to figure stuff out, and I got drunk and slept with a girl from work.”

Amir also very recently nearly had a fling with a work colleague.  This was after the break up, but the work colleague is (a) married and (b) still very much in the picture.
“Work was really intense at the time, we were doing long hours and we got very close.  Then one night we got drunk and she missed the last train. She asked if she could stay at mine.  I knew if I let her come back stuff would happen, so I told her to get a hotel.”

This is Not Good.  He cheated on his ex. He fancies his married colleague too much to trust himself alone with her.
This is what’s bound to happen if you date a charming, attractive guy. There will always be other women snapping at your heels.  Fucking bitches.

Lucy needs to find herself someone boring and ugly.

For the rest of the evening Amir is full of compliments and offers of ways they can spend time together. He invites her round to meet his kids. He offers to cook her dinner.  He suggests they meet up another weekend and spend an entire day hanging out together.

But Lucy’s not sure she trusts any of it.  He seems to be full of promises but will he ever deliver? She’s beginning to think he’s just twitchy about being single and looking for reassurance.  Why does everything have to be so difficult and complicated?

They walk back to Victoria Station together and he waits while she buys a ticket. The next train is in ten minutes.
“You don’t have to wait,” she tells him.  Hoping he’ll insist anyway, of course.  Ten minutes is enough time for a snog.
But he doesn’t.  He gives her a long hug and then walks away across the concourse.  Lucy watches him go.  He doesn’t look back.

She boards the train. It’s rammed but she manages to find a seat opposite a filthy bearded man with a beanie on pulled down low over his eyes.  He stinks of unwashedness and booze and is probably homeless.

She gets her phone out and texts Amir.

This conversation is SO fucked up.  Lucy wants to strike a balance between being flirty and encouraging Amir, while at the same time still maintaining the veneer of friendship.  But now she seems to be weirdly encouraging him to date other girls, which is not what she wants at all!
Time to reel it back in. 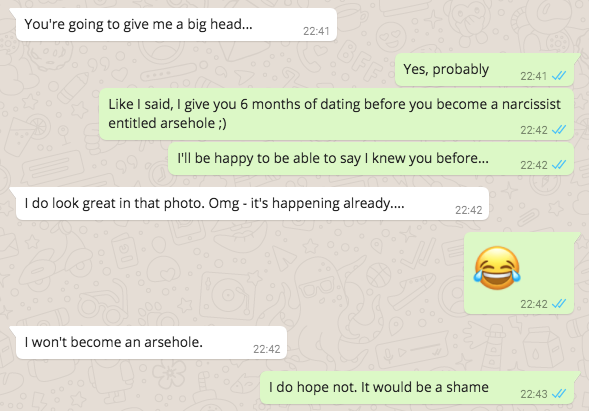 This kind of chat is definitely not Friend Zone territory.  Is he drunk?  He only had a couple of beers and a cocktail so he can’t be.  But then why the actual fuck doesn’t he just ask her out properly? 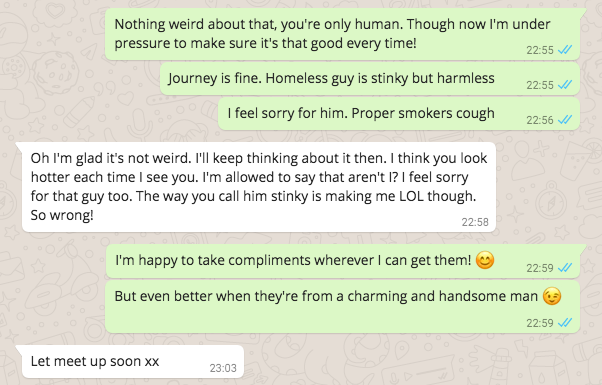 “I’m allowed to say that aren’t I?”  Amir clearly knows he’s crossed a line, and Lucy is happy to encourage him to take little baby steps ever further across it.  But her patience is already starting to wear thin. 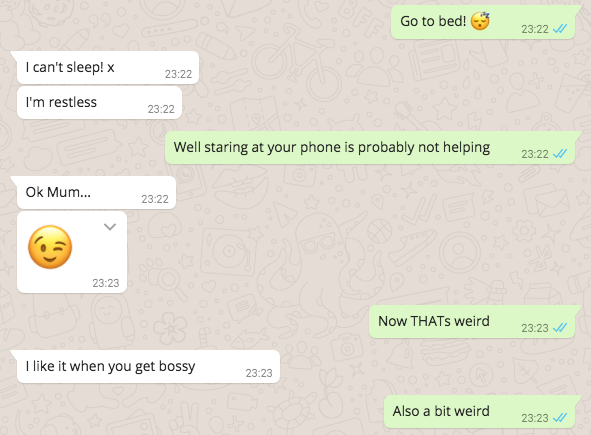 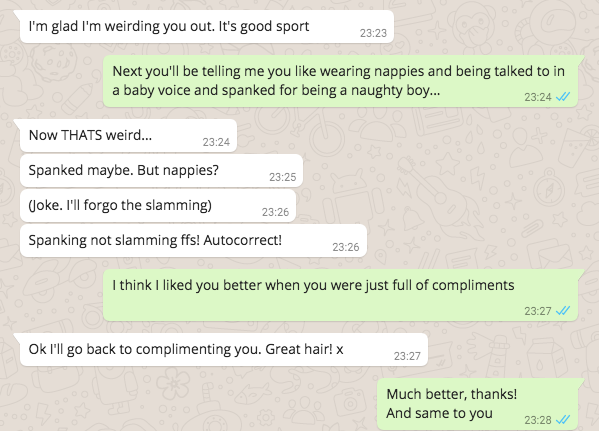 Then there is silence.  He must have gone to bed.

And Lucy hasn’t heard from him in over a week.
(To find out what happened next, click here)