Lucy has been flirting for weeks with her friend Amir, who recently came out of a long-term relationship.
(If you missed it, you can read from the beginning here, or catch up on last week here).
The flirting has made Lucy realise she has feelings for Amir.  In fact, quite frankly, she fancies the pants off him.  But in spite of some Grade A flattery and many, many hints at the possibility of a date, so far it’s been a case of over-promise, and spectacularly under-deliver.
Until now.  Finally, he’s asked her out. And of course she couldn’t say yes fast enough.
But since this is Lucy we’re talking about, it wasn’t just a case of ‘Would you like to go for a drink?” “Why yes, as it happens, I would!”  Noooo, of course, not, that would be far too normal.
In reality the circumstances were more dysfunctional and thoroughly British than a Richard Curtis movie.  Lucy only managed to get Amir to ask her out on an actual date by advising him to join the Bumble dating app, waiting until he matched with her, and then pretending that she didn’t know him.
I kid you not – you seriously can’t make this shit up.
So now the date is in the diary, and everything is rosy, and Lucy is in Spain with work.  It’s been a few days since she last heard from Amir, so she drops him a cheery text. 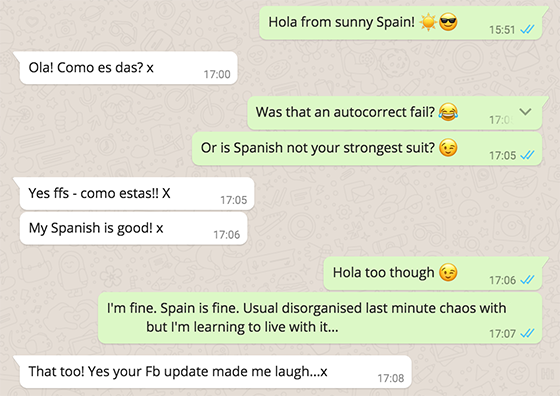 He doesn’t reply.  This is annoying – but she guesses she can live with it.  Maybe he didn’t think she really meant for him to answer her direct question.  Maybe he’s just busy.  He’ll reply soon, I’m sure, she thinks.

But after a week of silence the anxiety is starting to surface.  Although Amir is a great guy, he does have a tendency to be a little flaky.  It’s understandable – he has a demanding job and an ex-partner and two kids to deal with, so he can’t always be available, but she would like some reassurance that he’s not going to cancel their date.  And the fact that his messages have completely dried up makes her worried that this could be a possibility.  Surely if he was as excited to see her as she is to see him, he’d have replied by now.

The problem is, he has form – he’s flaked on her before, more than once.  But surely this is different.  Before, that was just friends meeting for a drink.  This is a DATE.  Please God, PLEASE don’t let him cancel.

And Lucy’s not even fucking religious.
To prevent the doubt and insecurity driving her up the wall, she decides to message him to double check.

And there it is. She knew it. Just knew it.  Her spidey senses were tingling, and with good reason.
Lucy is properly, properly gutted. 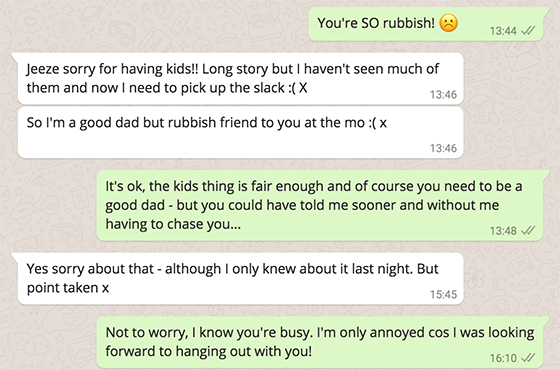 It’s impossible to know.  Half the time Lucy worries that she’s not encouraging him enough – that she’s stuck to the ‘we’re just friends’ line so well that he’ll think she’s not interested and give up. The other half of the time she worries she should be playing harder to get.  Men like the chase, don’t they?

Maybe she should have made him chase her, because now he doesn’t reply.

So he’s cancelled the date with no apology – and no suggestion that they reschedule.  This does not bode well.  She knows she should be angry, but she’s mostly just upset, and can’t stop checking her messages to see if he’s replied.  She tries to distract herself with work, going to the gym, and randomly swiping on Bumble, but every time she logs in there she sees his profile at the top of her matches.  It’s bloody infuriating.

The next day, Lucy hears some bad news that she knows will have indirectly affected Amir.   Her immediate instinct is to get in touch with him, to see if he’s ok, but now she’s not sure if she can do that.  She can’t double text him, can she? That really would be breaking all the rules.

It may also just be possible that the news isn’t all that bad, and it would be fine not to contact him, and Lucy might just be looking for an excuse.  Maybe.

On the other hand, she tells herself, he’s a friend.  If he’s received bad news, she should offer support.

So like the kind, caring person she is, she selflessly puts dating rules aside and messages him again. 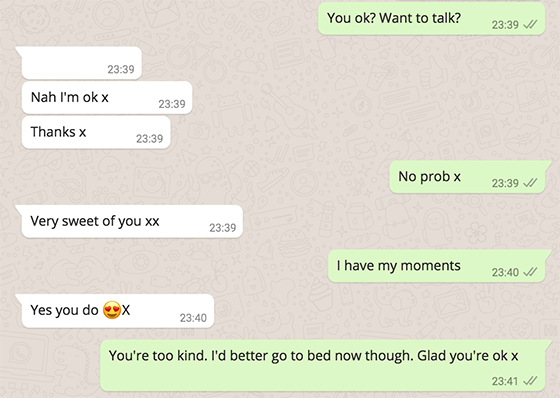 The little heart-eyed emoji gives her a burst of hope, but Lucy’s also not a total idiot (most of the time).   She knows these are breadcrumbs: she can feel him slipping away, and her instinct is to reach out and grab him.   To stop him, make him stay.
So a few days later, when a work question comes up, she contacts him again.  She knows she shouldn’t, but things are already starting to spiral a little out of control.
And anyway, she tells herself, he’ll know the answer. It’s totes legit to call him.  If I don’t, it’ll take me ages to solve the problem by myself.  Why would I bother with that, when one quick call to Amir will sort it out in seconds?  He’ll never know it was just an excuse to speak to him.
So she picks up the phone.  It goes to voicemail, and she leaves a cheery message asking for his advice on the work thing.
Three days pass and he doesn’t call back.
By now Lucy is in full wrath mode.  Why the fuck did he not respond to her voicemail? He could have texted the answer, and he didn’t even bloody bother to do that!
What’s happened? Did she do something wrong?  A couple of weeks ago he was full of compliments and flirting, but now, overnight, the heat has been snuffed out of this relationship.  Someone who was as interested as Amir seemed to be would have called back for sure.  And a good friend would have called back to help solve her problem.  He did neither.
Lucy is starting to think that Amir is not one of the Good Ones after all, but actually a total cunt.
(To find out what happened next, click here.)