We left the story of Lucy and Amir at the point where Amir, who until last year had just been Lucy’s good friend, had asked her out on a date and then cancelled it and vanished.

If none of this is making any sense, you’d better catch up first.  Here’s the start of the story, and here’s last week’s post.

Lucy is not the sort of girl to just sit back and take shit from anyone, so after trying to play it cool for a while, she rang Amir and left a message demanding an explanation.

The tone of her message clearly woke him up, because after weeks of silence he finally texted back.  Lucy, who by this stage boiling with hot rage at the way he’d behaved, decided to play him at his own game and not reply for a few days.  This clearly pushed his stupid boy buttons, because he then rang her twice and sent a further SIX messages with an increasing sense of urgency.

Lucy decided to ignore all these messages too – not because she was deliberately trying to punish him (ok, well, maybe she was, just a little bit), but more because she didn’t know what on earth she was going to say.

So she said nothing, which clearly got right up Amir’s nose.

Lucy knows that at this point she should let him stew for a while.  Let him experience what it’s like to be ghosted for a change! But she can’t.  She’s always been terrible at game playing. And she’s even worse at sitting quiet.  Always one to wear her heart on her sleeve, if Lucy has something to say, she’s going to say it.  It’s a trait that has frequently got her into trouble – but right now she doesn’t much care, tbh.

What’s more, the longer she doesn’t reply, the longer this whole sorry saga drags on. And while it’s dragging, it’s occupying far too much of her energy, as she turns it round and round in her mind and tries to figure out what she will say when she finally does reply.

So she messages him.  A full, frank, and honest assessment of the situation.

She types the message into WhatsApp, pauses for a second to look at it, then takes a deep breath and hits enter with decisive force.

It doesn’t take him long to reply. 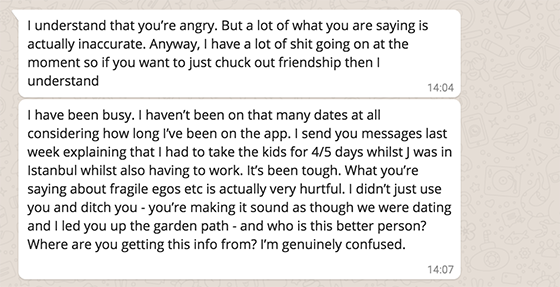 It strikes Lucy immediately that this message is just one long string of denials and excuses.  She’s not impressed.

Well at least now he’s apologised. That is something at least.  But Lucy still doesn’t feel that she’s got to the bottom of what’s been going on.   It would be much better if they spoke in person – particularly since he appears to be on the end of his phone right now.

Now Lucy feels bad.  And sorry for him.  Was she too harsh?  Sigh.  She takes a slightly softer tone. 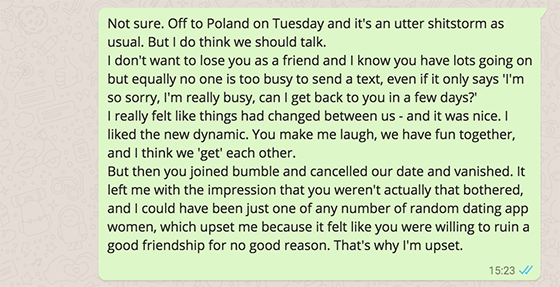 ‘Back on track?’  What does that even mean?  Lucy notes with a sinking feeling that he keeps using the word ‘friend’.  Clearly she has been put back in the friend box – although this much has been obvious since he cancelled their date.  So then why ask her on a date in the first place?  He needs to explain. 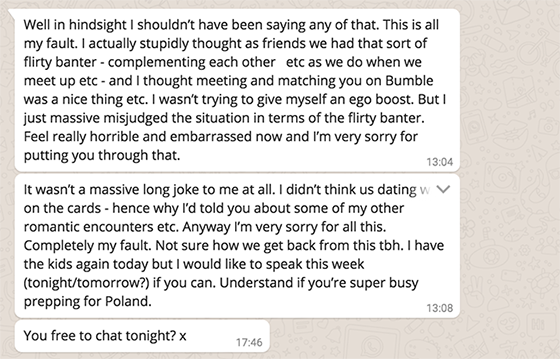 The longer this chat goes on for, the worse Lucy feels.  Is this partly her fault?  Did she get the wrong end of the stick?  Misread the signals (well duh!)?  Is she really so full of herself that as soon as a guy so much as smiles at her she assumes he wants her?  Or was it the exact opposite: her insecurity causing her to develop feelings for any attractive guy who shows her the slightest attention? 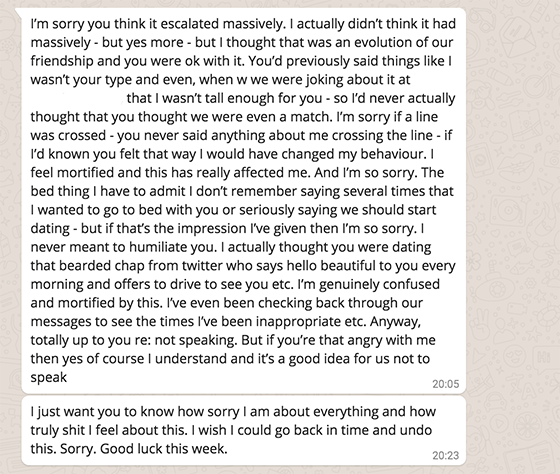 Lucy thought she wanted answers, but now that Amir seems to have miraculously developed the ability to communicate, she’s not sure any of this is helping.  Instead, his responses are only making her feel worse – embarrassed that she misjudged the situation, worried that she’s now lost a good friend, and anxious that somehow her failure to handle the situation better has caused it to escalate beyond repair.

But she’s also angry with Amir for putting his shitty feelings onto her too, and apparently making it her responsibility to make him feel better.

Well that she absolutely won’t do.  She’s already told him she has nothing more to say, so she doesn’t reply.  Hopefully he’ll get the message.

He doesn’t.  The next morning he texts again.

It’s curious.  When she wanted him to message it drove her bonkers that he didn’t.  Now she wishes he would leave her alone and he won’t.  What is that all about?!  And why do so many men only seem to up their game when they suddenly feel they have a point to prove?

Well, it’s a woman’s prerogative to change her mind.  Plus, his name repeatedly popping up in her notifications is completely doing her head in.  She needs him to just fuck the hell off now so she can get over her embarrassment.

Though of course she puts it in a nicer way when she replies.  It seems to be the only way to get rid of him.

Then Lucy archives the chat so she won’t have to see it in her inbox any more, pours herself a large glass of wine, and goes back to swiping on Bumble.

UPDATE:  A couple of months later, Lucy met up with Rick again for dinner.  He revealed that Amir was now in a relationship with a ‘hot Danish girl’, but was also cheating on her with another girl 10 years his junior.  So it seems that when Lucy gave him 6 months before he turned into a dating app fucktard, she was being overly generous…