Now that things have gone tits up with Lucy’s friend Amir, she’s decided to dive back into the dating pool. 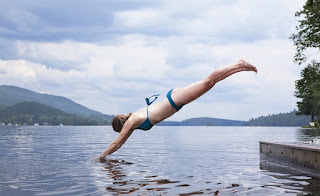 But wait.  To understand this next story, we first need to go back, waaay, back, into the mists of time…

Well, by ‘waaay back’, I mean two years ago.  And by ‘mists of time’, I mean that hazy period just after Lucy had been dumped by the ex when she was drinking a lot, not eating much, and wondering if she was doomed to be single for the rest of her life.

So actually, not much has changed.  Apart from the not eating thing. Lucy’s appetite is just fine these days, thank you very much.  If never stopping eating and secretly bingeing on cake and chocolate counts as fine.

Newly-single Lucy has just joined Tinder, because she’s heard that’s what single people do these days, and because she hasn’t yet discovered what a time-sucking, sanity-destroying cesspit of horrors it is.

And one of the first people she matches with is Lewis.  Lewis is in his early 40s, a tall silver fox who works for Sky.  He seems intelligent and funny, so when he asks for Lucy’s number so they can chat on WhatsApp, she hands it over readily.

Lucy still has a lot to learn.

Unlike most of the swamp creatures that inhabit the dark Tinder underworld, Lewis actually seems normal, personable, and witty.  So Lucy agrees to meet him for a drink.  Maybe she isn’t destined to die alone after all.

But before you get too excited, remember… this is Tinder.  And once you remember that, I’m sure it will come as no surprise to you to learn that a couple of days before they are due to meet, Lewis cancels. 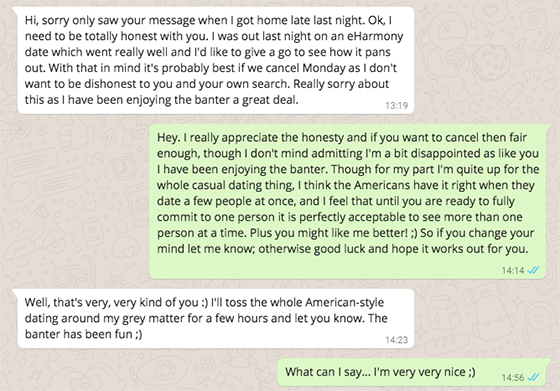 At this point Lucy is still fresh out of the box in the dating app hellworld, and hasn’t yet learned to be bitter and jaded about the whole bastarding charade.  She doesn’t realise cancelling a date is typical of the male inhabitants of the Tindersphere, so she responds graciously.  Even when Lewis basically ghosts her.

And that is that.  Until now.

It’s two years later, and our heroine, fed up with the current crop of Peter Pans and narcissists on Bumble, decides to have a go at something different.  She joins another dating app called Hinge.

On Hinge, you don’t have to match with someone to see if they’ve liked you.   You simply post your photos and text, and if someone likes what they see, they can comment.

And literally the very first person who likes a picture on Lucy’s new Hinge profile, just a matter of a few hours after she’s created it, is Lewis. 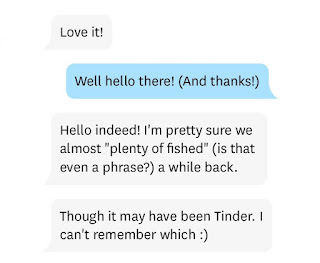 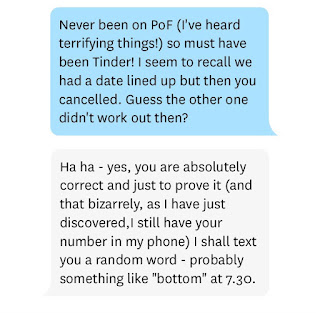 Perhaps the last two years have made Lewis more reliable, because as promised, exactly at 7.30, he does exactly that. 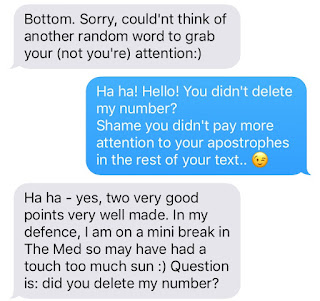 Lucy’s phone has actually already made the connection – and even remembers Lewis’s last name. That means she can now legitimately online stalk him and find out what he’s been up to the last two years. 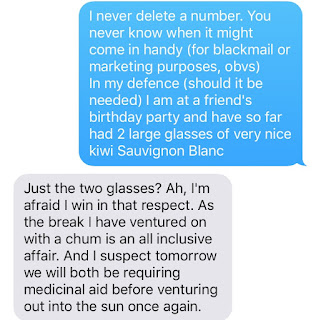 His messages make her smile.  Lucy likes a man with a large… vocabulary, and the fact that Lewis uses words like ‘ventured’ and ‘chum’ is definitely encouraging. 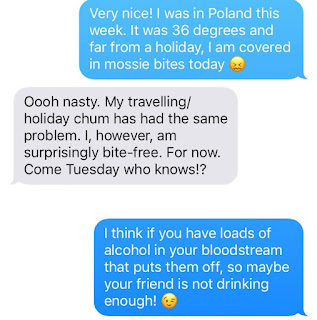 To save having to spend time LinkedIn stalking, Lucy asks Lewis what he’s been up to, and if he still works for Sky.  He tells her he does, even though he sometimes feels guilty about indirectly helping to put money in the pockets of Sky’s boss – evil media baron and arch-villain Rupert Murdoch. 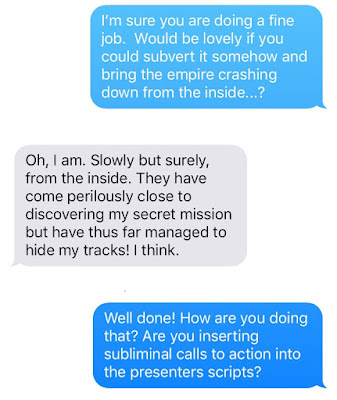 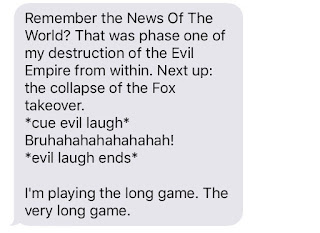 Well this is all going rather well, Lucy observes with caution.  He has an interesting job, and great banter.  Maybe she will forgive him for cancelling on her two years ago.  But that doesn’t mean she’s not going to give him at least a little bit of grief for it. 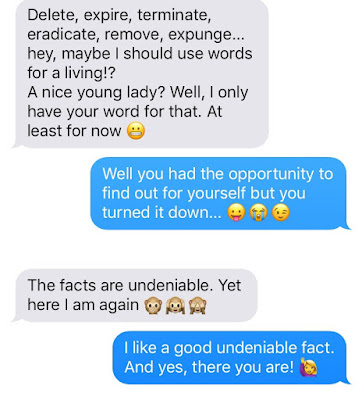 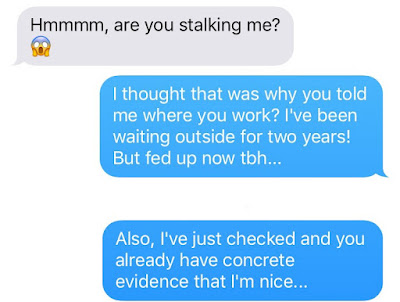 Lucy has a quick search into her WhatsApp archived chats, and luckily enough, the old conversation is still there – complete with his message cancelling the date and her gracious response – proving categorically that she’s nice – or at least she was back then.  She screen grabs it and triumphantly sends the image over. 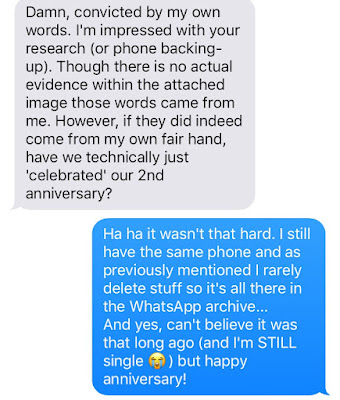 The idea of a second anniversary with a man she has never actually met makes her chuckle.   This is all very encouraging. 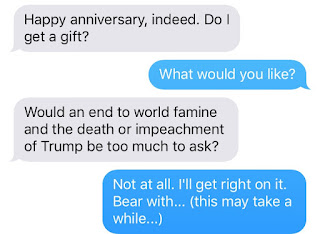 So this is pretty promising, she thinks.  Lewis could have asked for anything for his fictitious anniversary gift: a fast car, a big house, a private island, a bathtub full of diamonds – but rather than request material items that would benefit himself, he went straight for things that would benefit humanity as a whole.
This shows he has Integrity.  Could it be that Lewis is one of the Good Ones? 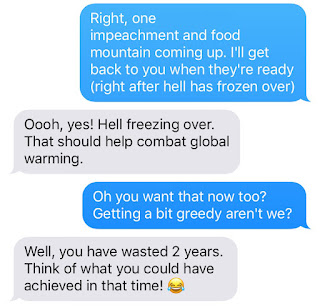 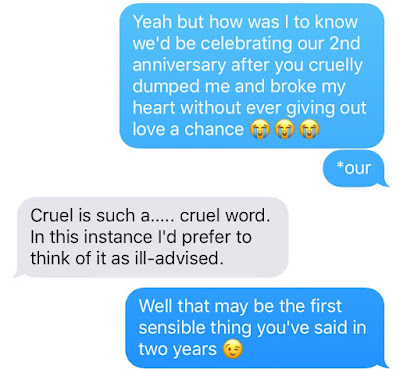 Lucy hasn’t had such good banter with someone in ages.  Now she just needs Lewis to actually ask her out for a drink.  She can’t possibly ask him, not after he cancelled on her last time.  That would count as chasing, and Lucy now knows that when a girl chases a guy, it never ends well.
She just wishes he’d hurry the fuck up and ask. But he doesn’t.
Then, a few days later, disaster strikes.  On Friday afternoon a flaky friend cancels their plans for the next day, and Lucy suddenly finds herself face with the prospect of – horrors! – nothing to do on Saturday afternoon.
She needs a plan, and fast.  Lucy goes through her dating app chats to see if there are any potentials in there whom she could possibly ask to be her short-notice Saturday stand-in.  But there’s no one suitable.
She faced with a choice: either a dateless Saturday, or risk appearing desperate and ask Lewis out after he cancelled on her last time.
Neither option particularly appeals. But in the end Lucy comes to the conclusion that putting herself out there is, by a slim margin, the lesser of the two evils.  So she goes for it, in as ‘playing-it-cool’ a way as she can manage. 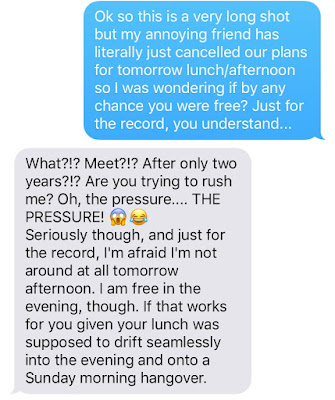 His reaction makes her laugh again.  But to meet someone for the first time on a Saturday night means taking a huge risk.  What if he doesn’t live up to the banter? What if he doesn’t look like his photos? What if, in person, he’s creepy and weird? Then she’ll be stuck out on a Saturday night without an early start for work the next day as a credible excuse to leave.

It’s a mistake Lucy made once before. The guy was a lawyer, with great, laugh-out-loud banter and a handsome face. So when he suggested a Friday night date, she agreed. But what she had failed to notice was that all his photos were headshots – and it turned out there was a very good reason for that. In person, not only was he surprisingly awkward, he also had a giant investment beer gut, clearly the product of far too many boozy client lunches and three-course dinners.  This enormous girth, attached to an imposing six-foot-four frame and pressed up against her in a crowded bar, made her feel panicked and claustrophobic.   She managed one excruciatingly uncomfortable drink before making her embarrassed excuses and leaving her date bewildered at the bar, wondering what he’d said to upset her.

Lucy is determined not to go through that again.  But what can she do?   She has no Saturday plans, and Lewis is her only option.  So she takes a deep breath, and agrees.

At least she’s seen a full length photo this time, so at she knows he’s definitely taller than he is wide. 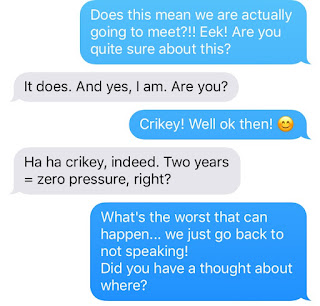 Lewis lives not too far from Lucy’s home in West London, so they agree to go for drinks in Hammersmith. 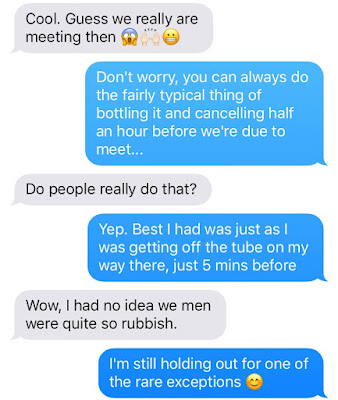 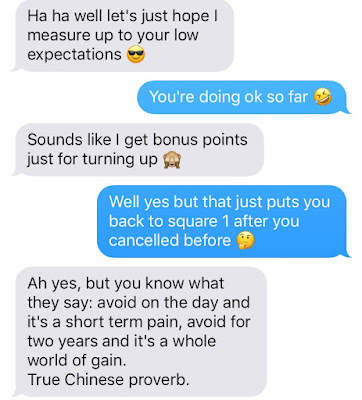 Funny.  The guy is funny. And funny is important.

Despite years of dating disappointments, Lucy is cautiously optimistic.