Lucy is back on Bumble, and has matched with Barry, who has a fucking stupid name.

Lucy really struggles when a guy is called something shit.  She knows it’s not his fault, and probably bears little reflection on what he’s like as a person – but from before she’s even met the man she imagines herself having to say things like: ‘Mum, Dad, this is my boyfriend Keith’, or ‘I, Lucy, take thee, Trevor…’, and she doesn’t think she’d be able to do it.

And Barry is probably up there in the top 10% of stupid names. It’s not like there are even any really good famous Barries.  With Kevins, at least you have Kevin Costner.  If anyone raises an eyebrow at you dating a Gary? Well, you can always refer to Gary Barlow or Gary Lineker.   But for Barry, the best she can come up with are Barry Manilow and Barry Gibb from the Bee Gees.  And neither of them is remotely sexy.

This Barry, on the other hand, looks pretty sexy.  He’s 45, but he looks about 40, with a full head of hair that’s somewhere between salt and pepper and silver fox.  All of his photos show him doing sporty things: running a marathon, mountain biking, rock climbing, driving a 4WD vehicle in the desert… so it’s obvious he’s adventurous and active and has a great body.   Just Lucy’s type.

The only thing missing is that he doesn’t say how tall he is, and from the photos it’s hard to tell.  He could be pint-sized; he could be a hunk.  It’s impossible to judge from this distance.

But Lucy decides to overlook this – and the name issue – and give him a chance.  So she messages him.

Barry says he’s new to Bumble, and isn’t sure of the etiquette.  Lucy jokes that he’s already getting it wrong by replying to her at all since most men on dating apps don’t bother.

It’s the start of some brilliant banter. 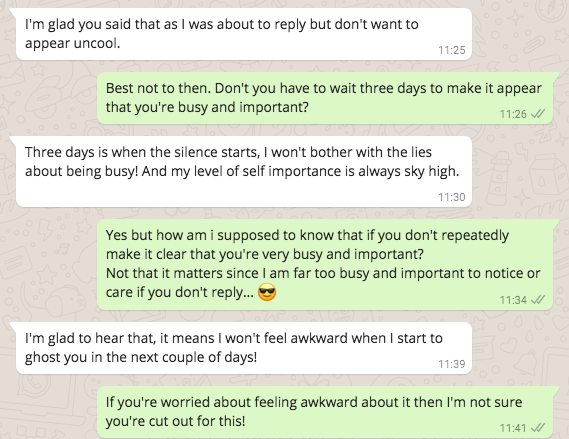 This is a cut above most men’s normal opening chat – which usually just consists of mind-numbingly dull questions about what she’s been up to this weekend and what she does for a living (even though the latter is quite clearly stated on her profile, FFS).

Barry is responsive and funny.  Definitely one she’d like to meet… if he would only ask.  But this may be tricky. 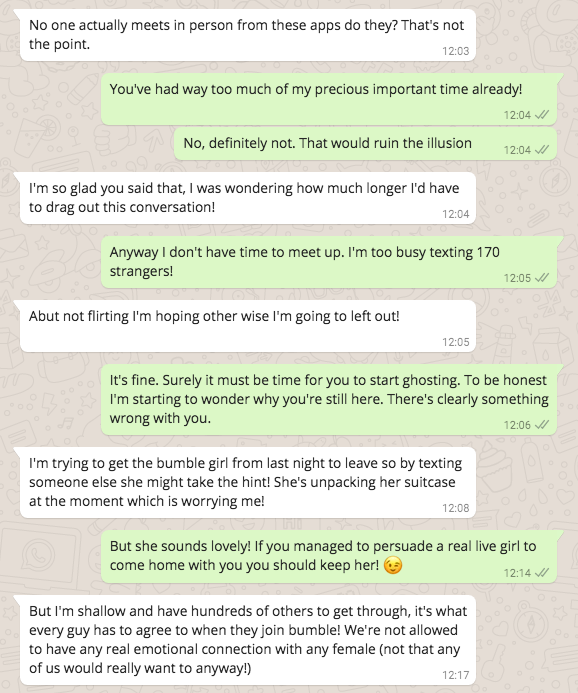 Although Barry isn’t too careful with his typos, he seems to be witty and intelligent.  A lot of Lucy’s boxes are being ticked here.  Lucy likes a nice box ticking.

The only thing she really needs to know now is – is he taller than her?  But she can’t ask outright, that might be considered rude.  So she tries to sneak the question in along with a host of others.  Hopefully this way he might not notice. 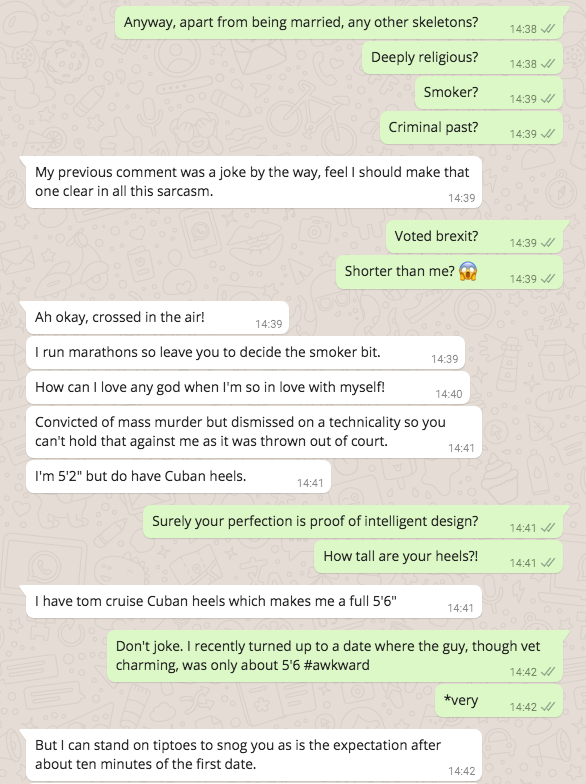 Barry really is the King of Banter.  At least, Lucy’s very much hoping the 5’2 thing is just a joke.

He asks how her day’s looking and Lucy tells him it’s going to be stressful – but not in the way he might think. 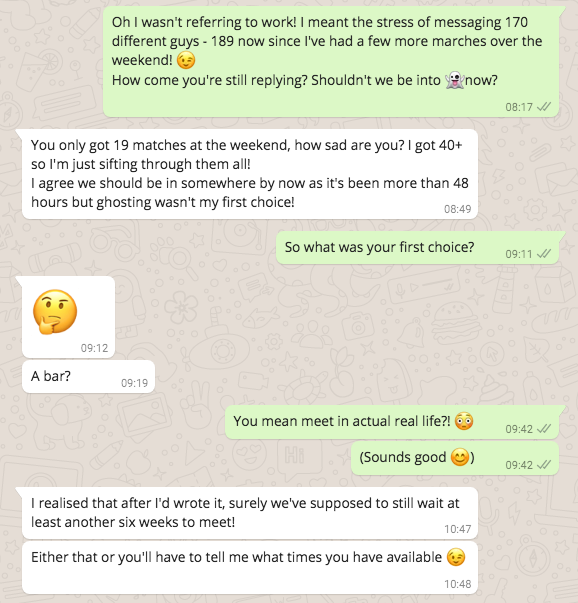 At last!  A date!  Lucy is properly chuffed.  She’s got high hopes for this one.

The problem is, she still doesn’t know how tall he is.  And no matter how handsome and witty he may be, she still won’t fancy him if he’s shorter than her. 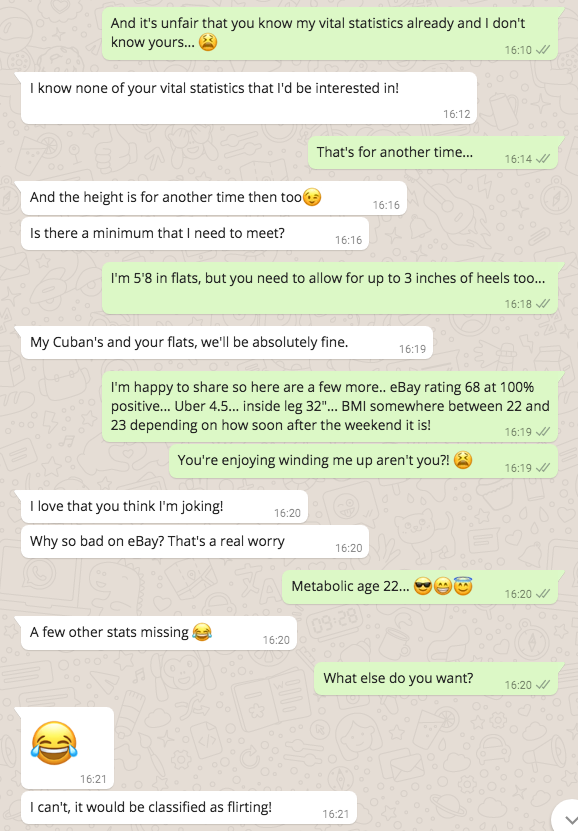 As entertaining as this banter is, Lucy is starting to get a little frustrated.  How is she ever going to get a straight answer out of this guy? 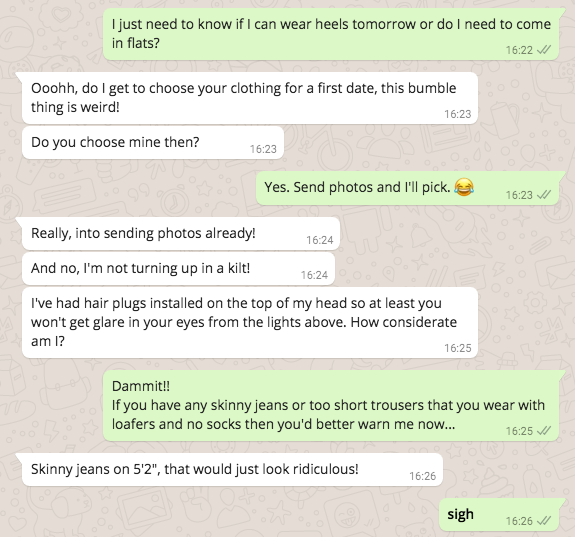 There’s nothing she can do.  She’s just going to have to risk it.  At the very least, the date should be a laugh.

They agree to meet in Shepherds Bush. 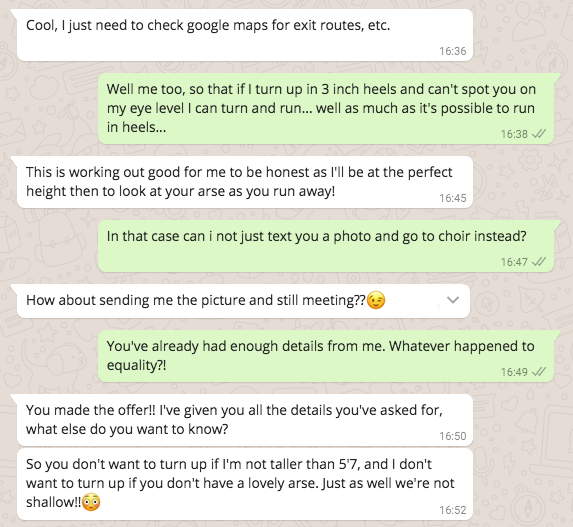 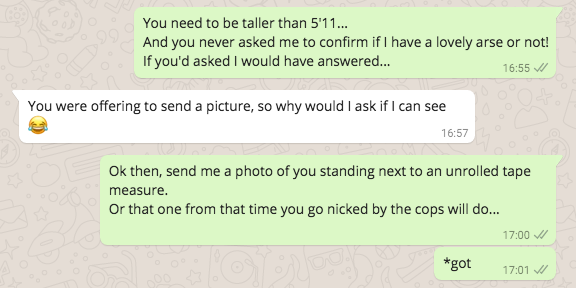 There’s a pause in the conversation.  And then a photo lands in her inbox…

(For the record, Lucy doesn’t LOL. In fact she openly despises people who LOL, especially given that most of the time they’re not actually laughing out loud, and often the thing that they’re LOL-ing at isn’t even remotely funny.)

But in Barry’s case, it’s a different story. 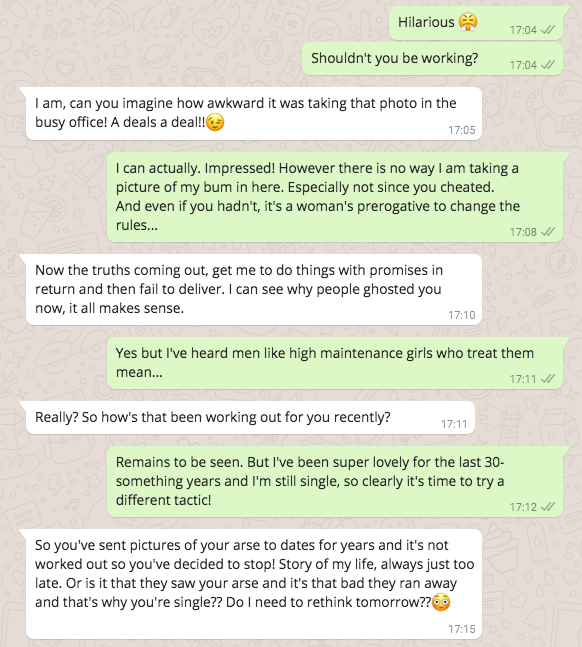 They appear to have reached a stalemate.  Barry wants to see a photo of Lucy’s bum; Lucy wants to know how tall Barry is.  Neither is willing to budge. 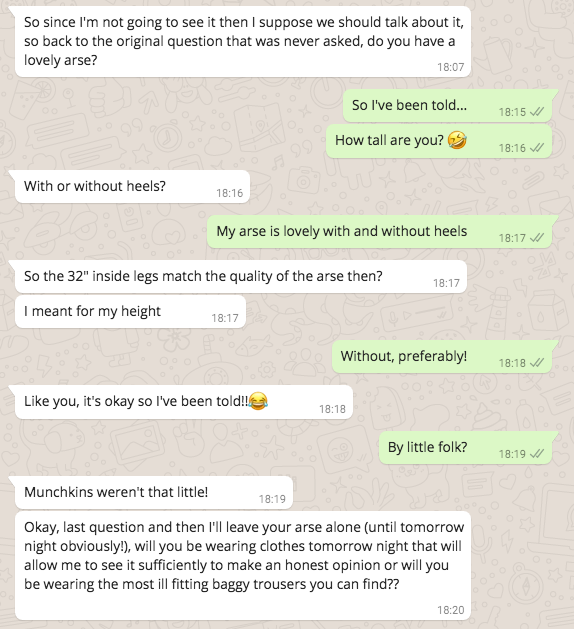 This is something Lucy is going to have to think carefully about. Does she want to wear something that accentuates her posterior?  Or will she feel so self-conscious about him checking it out, that she’d be better off wearing something loose-fitting so that she’ll be more comfortable?

Well, she didn’t want to seem too desperate for the answer, did she?

(Possibly a bit late for that though, to be fair.) 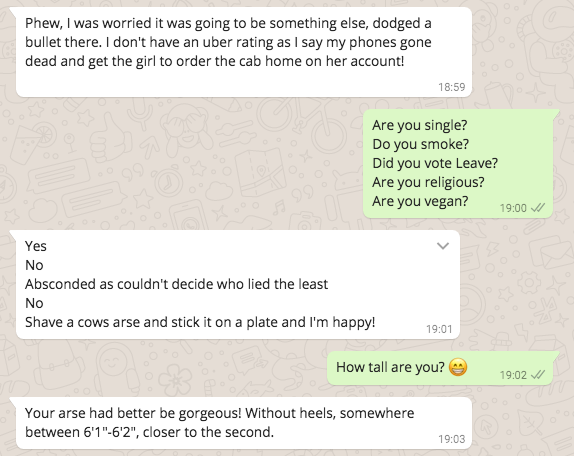 Hallelujah!  Finally an answer!  And even better than that, he’s tall!

Lucy couldn’t be more delighted.  A man who is sporty, handsome, chatty, intelligent, funny – and tall too!  This could really be it.   Maybe Lucy’s endless search is about to be over.

On the day of the date, she’s nervous and excited.  And so, it seems is Barry, who’s back on WhatsApp first thing in the morning.

But Lucy already knows she’s going to be staying.  This is definitely a multiple glasses of wine kind of date, no question. 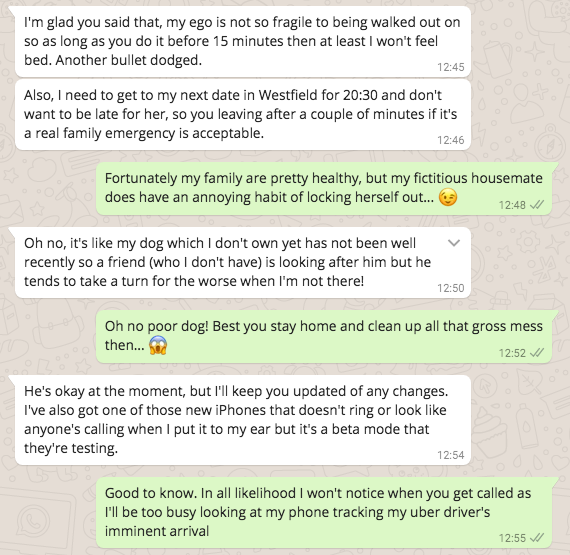 Lucy did actually use the housemate excuse once.  Her date was so monosyllabic and the chat so awkward that she couldn’t bring herself to stay more than about half an hour.  She pretended she’d had a text saying her housemate had lost her keys and needed to get into the flat, and then swiftly left.  No clue whether the guy believed her or not, but she didn’t really care.

But she’s pretty sure she’s not going to need any excuses with the lovely Barry. 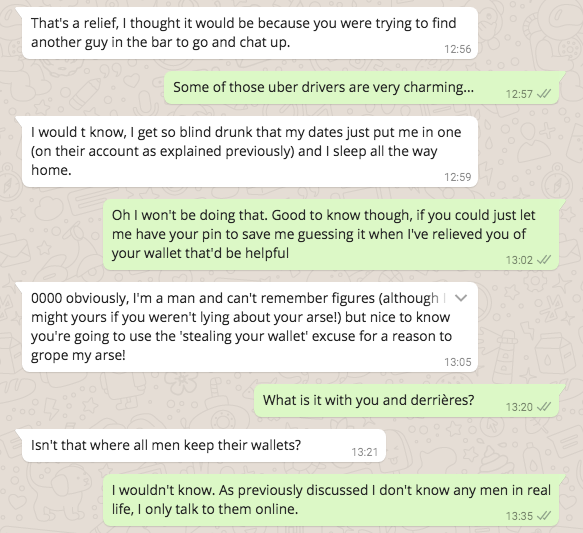 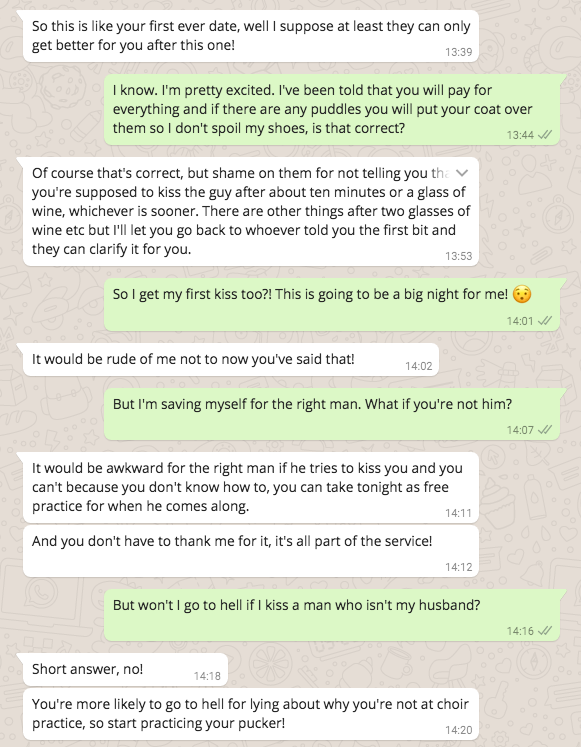 Lucy rarely kisses guys off the internet on the first date.  Mostly the dates don’t go that well.  But now that the subject of a snog has been brought up, she wonders if one might be on the cards.

Mind you, she doesn’t want to get ahead of herself.  Barry may be tall, handsome and funny, but all sorts of things could still go wrong here.  Better to expect the worst and hope for the best. 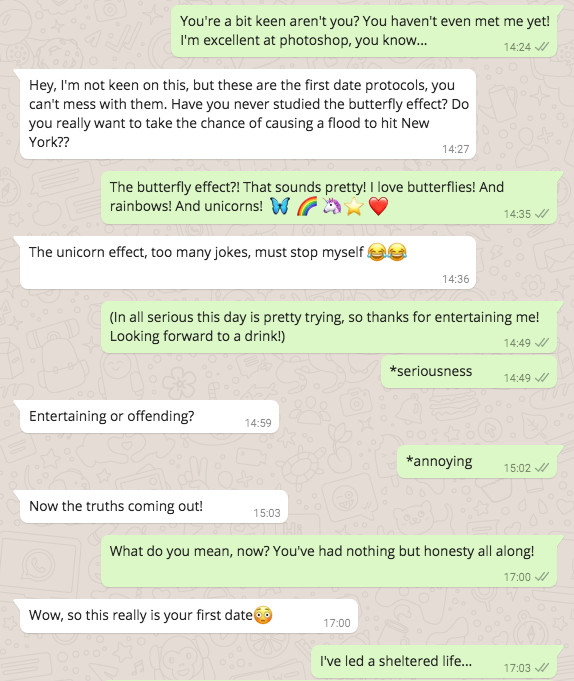 Still, even with Lucy’s careful management of her own expectations, she can’t help but be excited.  In all her years of online dating she’s never had this much fun with someone before they’ve even met.